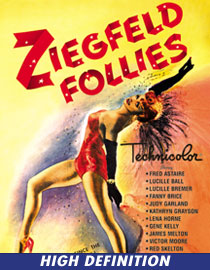 Florenz Ziegfeld, Jr. and his legacy captivated Hollywood, especially once the rise of the talkies made Ziegfeld style entertainments possible onscreen. Most classic Hollywood musicals opt for a narrative framework to hold their production numbers together, but others, like Ziegfeld Follies (1945), take the master’s approach to the musical and comedy revue. If you’re looking for a plot or any real meaning, you certainly won’t find it here, but you will find a charming collection of sketches and musical numbers performed by some of the biggest stars of the day, including Fred Astaire, Judy Garland, and Gene Kelly.

The revue opens as a kind of sequel to The Great Ziegfeld (1936), with William Powell reprising his role as the Broadway producer, now relocated to heavenly quarters. As Ziegfeld looks back on his career and ponders the kind of show he would make if he were still alive, the film transitions to a series of comedy bits, dances, and songs, mostly featuring MGM stars of the 1940s with a few nods to the old days thrown in.

The retrospective segment is done with stop-motion animation, which gets the picture off to a quirky start that kids might appreciate more than adults. Several of the other sequences also favor oddity over artistry, especially the comedy sketches with Fanny Brice and Red Skelton, but both of those stars know their way around a laugh, and Brice’s appearance brings some real Ziegfeld history to the film. Less successful is the pink circus number that sees Lucille Ball inexplicably cracking a whip at a crowd of sexy cat ladies; it would make more sense if this number were also played for laughs, but Ball is presented in full glamor mode, and the sequence seems to take itself seriously, even if the audience can’t. The Virginia O’Brien song, however, is lovably offbeat, just like the singer herself. O’Brien counters the opening song’s tribute to lovely ladies by singing the praises of manly men; the performance prefigures her memorable “Wild, Wild West” number in The Harvey Girls (1946), which would come out the next year.

Fans of Fred Astaire will find a lot to like in Ziegfeld Follies because he appears more often than any other performer in the film, but the highlight is a rare dance duet with Gene Kelly, which offers a first-rate opportunity to contrast the physical styles of the two stars. Other memorable performances include Lena Horne singing “Love” and Judy Garland giving a mock interview as a great dramatic actress. You’ll also find Cyd Charisse, Kathryn Grayson, Lucille Bremer, James Melton, Marion Bell, and Esther Williams in the revue’s more serious numbers, while Edward Arnold, Hume Cronyn, Victor Moore, William Frawley, and Keenan Wynn all appear in the comedy sketches.

Different directors worked on various segments of the picture, including Vincente Minnelli, George Sidney, Lemuel Ayers, and Charles Walters. If you enjoy the musical revue format, try Till the Clouds Roll By (1946) and That’s Entertainment! (1974). For more Ziegfeld films, see The Great Ziegfeld (1936) and Ziegfeld Girl (1941). Ziegfeld also appears as a character in many Broadway star stories, including The Jolson Story (1946), The Story of Will Rogers (1952), The Eddie Cantor Story (1953), and Funny Girl (1968).

You can currently see Ziegfeld Follies in HD on Warner Archive Instant.
Posted by Jennifer Garlen at 3:30 PM