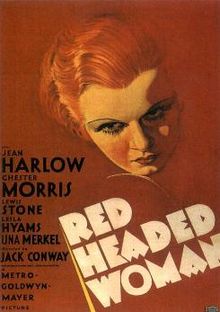 Red-Headed Woman (1932) mixes drama and comedy in its story of a relentless gold digger who sleeps her way up the social ladder, with Jean Harlow starring as the title character. Despite her reputation as a platinum blonde, Harlow goes red to play the sexpot siren in this Pre-Code picture directed by Jack Conway. Her costars include Chester Morris, Leila Hyams, Una Merkel, Lewis Stone, and Henry Stephenson, but the picture belongs wholly to Harlow and her scheming anti-heroine, a Prohibition Becky Sharp who’ll stop at nothing to get the wealth and status she desires. With its scandalous affairs and amoral protagonist, Red-Headed Woman is a perfect example of Pre-Code style, although Harlow’s character is so vicious a homewrecker that viewers may find her very hard to like.

Harlow plays Lil Andrews, an office girl with her eye on her married boss, Bill (Chester Morris). When Bill’s wife, Irene (Leila Hyams), leaves town for a few days, Lil makes her move and succeeds in busting up the marriage. Lil then tries to break into Bill’s society circle, taking her pal Sally (Una Merkel) along, but Bill’s family and friends prove much harder to win over. Undaunted, Lil plays a duplicitous game by seducing both Bill’s friend, Charles (Henry Stephenson), and Charles’ French chauffeur, Albert (Charles Boyer).

The role of the sexual adventuress puts Harlow’s raw sex appeal on full display, and there’s certainly plenty of her to admire on camera, even when she’s fully dressed. Her ample curves always suggest nakedness, even beneath the cover of her clingy, transparent gowns. It’s little wonder that every man she meets succumbs to her charms, even though her approach is so aggressive that it’s really more a full frontal assault than a seduction. Lil possesses none of the fresh, feisty sweetness that marks Harlow’s best roles, and the plot has no interest whatsoever in her moral development or redemption. Poor Irene gets blamed for not fighting harder to keep her man, but it’s impossible to root for Lil when Irene so obviously occupies the moral high ground as the injured and insulted wife. If Lil doesn’t end the picture as a murderess on death row, it’s not for lacking of trying on her part.

The supporting cast includes frequent Harlow gal pal Una Merkel as the comic relief, although mostly she’s there to gasp in shock at Lil’s outrageous behavior. Lewis Stone and Henry Stephenson are both solid as the older men, although Chester Morris’ Bill is such a spineless sap that we wonder why Irene wants him back. Leila Hyams, however, makes a perfect foil to Harlow as the cultured, elegant Irene, a cool blonde whose beauty has nothing to do with sex. May Robson has a fun role as Irene’s Aunt Jane, and Charles Boyer is obviously Lil’s natural match as the handsome chauffeur who dallies with her right under his boss’ nose.

For a different take on the Pre-Code sexual adventuress, try Baby Face (1933). You’ll find Harlow playing more sympathetic characters in Bombshell (1933), The Girl from Missouri (1934), and Saratoga (1937), with more direction on the latter two from Jack Conway, who also directed Harlow in Libeled Lady (1936). Chester Morris earned an Oscar nomination for Best Actor for Alibi (1929), but he also played Boston Blackie in a long series of films and did a lot of television work late in his career. See more of Una Merkel, a great comedic character actress, in Destry Rides Again (1939) and It’s a Joke, Son! (1947). The screenplay for Red-Headed Woman was written by Anita Loos, whose other credits include several Harlow films and classics like San Francisco (1936) and The Women (1939). Loos also wrote the original 1926 novel version of Gentlemen Prefer Blondes, which would help to create the lasting image of another iconic blonde bombshell, Marilyn Monroe, when it was adapted as a film in 1953.

Red-Headed Woman is currently available for streaming on Warner Archive Instant.
Posted by Jennifer Garlen at 9:01 AM