Classic Films in Focus: EYES WITHOUT A FACE (1960) 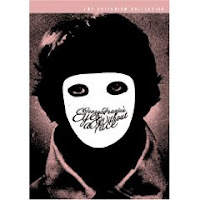 Horror is a genre that encompasses many things. Although today's horror films tend to focus on the explicit nature of graphic violence, classic horror films often eschew such overt terrors for the subtler approach, suggesting that things unseen are far more terrible than anything we could actually be shown. Eyes without a Face (1960) is very much an example of this other kind of horror. The eyes of the title belong to a girl whose mutilated face is never clearly revealed to us, and the movie is much the better for it. This is not a gore fest, and it is not a film for the shallow adolescents who crowd the multiplex for the latest installment of torture porn. This is art, and it shows in every detail of this lyrical, haunting, and deeply disturbing film.

The plot hinges on face transplantation, a timely subject since today's headlines are full of the latest developments in that field. A famous surgeon (Pierre Brasseur) finds the perfect guinea pig for these transplants in his own daughter (Edith Scob), whose face has been destroyed in a car accident caused by the doctor himself. Aided by a maniacally devoted assistant (Alida Valli), the doctor abducts young women and grafts their faces onto the unfortunate Christiane in an attempt to make medical history and alleviate his own guilt over the accident. Christiane, however, proves an increasingly unwilling subject, in despair over her own disfigurement but more and more horrified by her father's demented attempts to cure it.

Prisons are the theme here. Christiane lives in the prison of her father's house, unable to be a part of the world outside, and she is further imprisoned by the smooth, lifeless mask that covers her ruined face. We see birds in cages, dogs locked up in dark kennels, victims strapped to operating tables, and all of them function as doubles of Christiane. The doctor himself is caught in a prison of guilt and obsession, while his assistant wears her tight pearl choker like a chain, hiding the scars that tie her to him just as she seems to try to hide her unrequited passion for him. Nobody is able to escape, until Christiane finally emerges from her chrysalis like an apocalyptic butterfly, floating through the final scenes to leave death and freedom (they are the same to her) in her wake. 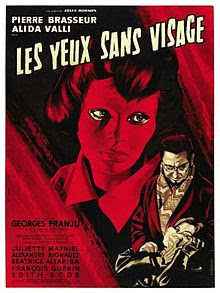 Director Georges Franju enhances these elements through his brilliant use of sound. You could watch this film with your eyes closed and still know it was a masterpiece. The opening theme accompanies the assistant, Louise, as she stalks and disposes of the victims. It's like carousel music, full of menacing horror beneath its falsely cheerful lilt. Christiane's music is more like that of a jewelry box, one with a broken ballerina inside. Animal sounds punctuate key scenes, with the dogs in particular howling and barking like souls of the damned locked up in the doctor's secret underground rooms.

I should warn you that the operation scenes can be hard to watch, even though gore is not the movie's aim. The effects work for the removal of the victim's face is startling, even in black and white. You keep hoping that something will happen to stop this slow destruction of a human being, but it doesn't, and the process seems excruciatingly slow, even though the whole film only lasts about 90 minutes. Even in the age of excessively realistic medical dramas the scene has the power to repulse and disturb.

Ultimately, Eyes without a Face plays out like a more plausible version of Frankenstein, and it asks many of the same difficult questions that Mary Shelley's novel placed before readers almost two centuries ago. That story was also concerned with the failures of fathers, with Victor Frankenstein's willingness to create a monster and become one himself in pursuit of his desire to cheat nature. It is a warning that continues to be given to us because we are still not listening to it. Franju's beautiful film about ugly things is an excellent exploration of just these concerns. If you want a horror film that transcends its genre, this is the picture for you.

This review was originally published on Examiner.com. The author retains all rights to this content.
Posted by Jennifer Garlen at 10:03 AM