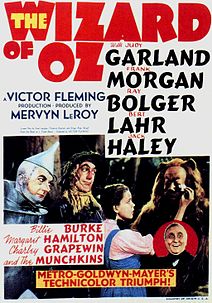 Certainly one of the top ten classic movies on almost any list, The Wizard of Oz (1939) has never ceased to attract new fans, and it remains the definitive adaptation of L. Frank Baum's classic novel, despite many contenders to that title both before and after. Its winning combination of story, spectacle, and sound draws viewers into its magical world, and, unlike Dorothy, they rarely yearn to go home. Directed by Victor Fleming (with help from George Cukor, Mervyn Le Roy, and King Vidor) and starring the divinely adorable Judy Garland, The Wizard of Oz may well be the perfect first film for the classic movie newcomer.

Garland stars as Dorothy Gale, a young Kansas girl who finds herself transported to the fabulous land of Oz after a cyclone carries her away from home. Unfortunately for Dorothy, her house crushes a wicked witch, which raises the ire of the witch's even more wicked sister (Margaret Hamilton). Dorothy sets off for the Emerald City in the hope that the powerful wizard there can return her to Kansas, and along the way she acquires three companions: a sympathetic Scarecrow (Ray Bolger), a sentimental Tin Man (Jack Haley), and a reluctant Lion (Bert Lahr). At the wizard's command, the friends attempt to earn their desired rewards by defeating the witch and her strange minions, but the seemingly Great and Terrible Oz turns out to be a rather different character from what they expected.

Beautifully nuanced performances from each and every actor make the characters live in our hearts. Garland is impossibly girlish and sweet, her big brown eyes round with a sense of wonder that we can't help but share. Bolger, Haley, and Lahr all endow their inhuman characters with tremendous humanity; they are funny because they are so likably real, and there's a sweetly platonic sense of romance in the Scarecrow's relationship with Dorothy. It's no wonder that she'll miss him "most of all." Margaret Hamilton sets the bar for wicked witches everywhere, and Frank Morgan pops up all over the place as an assortment of different characters, suggesting the dreamlike nature of Dorothy's adventure. 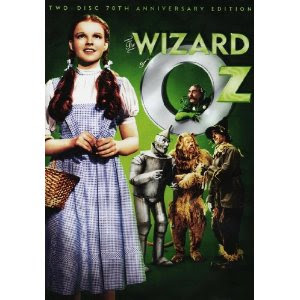 Even kids who have never known a world without 3D and CGI can appreciate the visual artistry of The Wizard of Oz. Its special effects have stood the test of time amazingly well, from the cyclone bearing down on Dorothy's farm to the army of winged monkeys filling the sky. The costumes and makeup still look fantastic, especially now that carefully restored versions of the film are available on DVD and Blu-ray. If anything, the effects and costumes might be too good for younger viewers; it's best to think about a child's tolerance for winged monkey attacks, scarecrow dismemberment, and witch melting before leaving your youngster to watch the picture alone. On the plus side, that first glimpse of Technicolor Oz is a moment of pure movie magic, an epiphany about film's unique ability to transport us to other worlds and change the way we see our own.

The Wizard of Oz earned six Oscar nominations; it won two, and Garland won a special Juvenile Award for her performance. It might have done better at the Academy Awards had it not come out in the single greatest year in Hollywood history, but that year would not have been as great without it. For more of Judy Garland and Ray Bolger, see The Harvey Girls (1946). The character actors who make up the cast of The Wizard of Oz turn up in hundreds of classic movies; they were some of Hollywood's hardest working performers, even though they never won or were even nominated for Academy Awards. Garland, of course, has become one of the most beloved stars of all time. See her in Meet Me in St. Louis (1944), Easter Parade (1948), and A Star is Born (1954) for more of her best performances.

This review was originally posted on Examiner.com. The author retains all rights to this content.