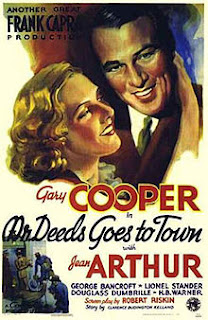 Frank Capra’s favorite themes are all in play in Mr. Deeds Goes to Town (1936), which stars lanky Gary Cooper as a typical Capra hero, an all-American everyman standing in opposition to a corrupt and selfish world. Equal parts social commentary and romance, Mr. Deeds Goes to Town sets the stage for later Capra pictures like Mr. Smith Goes to Washington (1939) and It’s a Wonderful Life (1946) but still shows a lot of the feisty chemistry of It Happened One Night (1934). In addition to Cooper, the movie features an especially effective performance from Jean Arthur as the cynical city girl whose world view is shaken by Deeds’ transparent decency.

Cooper plays the appropriately named Longfellow Deeds, a small town postcard poet who unexpectedly inherits a huge fortune and is whisked away to a life of luxury in New York City. Everyone he meets there is on the make, including the estate’s crooked lawyers and reporter Babe Bennett (Jean Arthur), who deceives Deeds in order to milk him for outrageous headlines but ends up falling for his straightforward charm. Babe inevitably throws her allegiance over to Deeds in an effort to save him from the schemes of a cabal of greedy attorneys who want his fortune for themselves.

Everything we really need to understand about the hero is included in his name, which has the same symbolic transparency as “Jefferson Smith.” Cooper really is a long fellow, but his character’s improbable given name mostly underscores his identity as a populist poet, in other words, a man who speaks for the people. In the city, however, words become the twisted weapons of the enemy, and then we literally know our hero by his deeds. These two elements of his personality play out in Deeds’ decision to give his unwanted wealth away to victims of the Depression and his eventual courtroom defense of that act, which the lawyers have seized as evidence of Deeds’ mental instability. 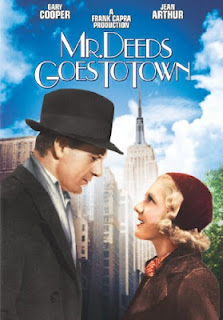 Cooper plays Deeds as a more formidable combatant than the Capra heroes embodied by Jimmy Stewart; he’s far more ready and able to knock his opponents down, and he does in fact punch quite a few people over the course of the picture. Jean Arthur, one of Capra’s favorite leading ladies, plays Babe as the twin sister to her character in Mr. Smith Goes to Washington; both are too smart for their own good but prove remarkably vulnerable to the naïve, straight arrow type. Douglass Dumbrille is always entertaining as a villain people love to hate, and his two-faced attorney is a perfect figure of every professional stereotype. Silent era veteran H.B. Warner, another Capra regular, puts in a memorable if brief appearance as the bemused judge who presides over Deeds’ insanity hearing.

This review was originally posted on Examiner.com. The author retains all rights to this content.
Posted by Jennifer Garlen at 10:19 AM