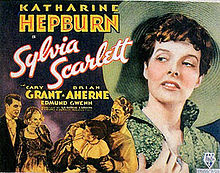 Before they made well-remembered classics like Bringing Up Baby (1938) and The Philadelphia Story (1940), Katharine Hepburn and Cary Grant first starred together in the more obscure Sylvia Scarlett (1935), a George Cukor picture with a plot straight out of Shakespeare’s play book. The story, adapted from a novel by Compton MacKenzie, is convoluted and thin, but the movie is worth watching for the performances of the two stars and the always entertaining Edmund Gwenn.

Hepburn stars as Sylvia, who first loses her French mother and then learns that her English father (Edmund Gwenn) is a crook. In order to escape the authorities, father and daughter flee to England, with Sylvia disguised as “Sylvester” to lower their profile. Along the way they take up with Jimmy Monkley (Cary Grant), a shady character who tries to make them his accomplices but ends up traveling with them as a caravan of entertainers. Sylvia maintains her male identity throughout these adventures but yearns to reclaim her femininity when she falls for a manly artist (Brian Aherne).

The cross-dressed role played by Hepburn is known as a “breeches part” and was quite popular during the Elizabethan period, where the ultimate irony of a girl dressed as a boy depended on the audience’s knowledge that the performer was, in fact, male. Kate might as well be playing Viola in Twelfth Night or Rosalind in As You Like It, and the caravan scenes highlight the feeling of being transported to an appropriate version of merry old England, with Henry Scarlett as a drunken Falstaff thrown in for good measure. The gender confusion allows the picture to flirt with homoerotic moments as female characters make plays for “Sylvester” and Sylvia pines after the artist, Michael Fane. Brian Aherne, who plays Fane, was an actor so regal that he appeared as King Arthur in two different films. 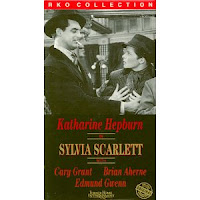 As spunky as Hepburn is in her boyish guise, it’s hard not to focus on Cary Grant’s slippery Jimmy as the more interesting character. This is one of the rare roles in which Grant actually sounds like Archie Leach in his music hall days, milking a Cockney accent for all it’s worth. Grant was born in Bristol, far beyond the sound of Bow Bells, but the characteristic accent heard in most of his roles was as made up as the name “Cary Grant.” Jimmy proves too slick a character to peg as either good or bad for most of the film, but somehow we get the feeling he ought to attract Sylvia a lot more than he does. A rogue is always more fun than royalty, no matter how much Sylvia swoons over Michael’s leonine charm. Grant would have better luck getting Hepburn’s attention in their next three pictures together, which might explain why most viewers prefer the later films.

This review was originally published at Examiner.com. The author retains all rights to her content.
Posted by Jennifer Garlen at 1:18 PM