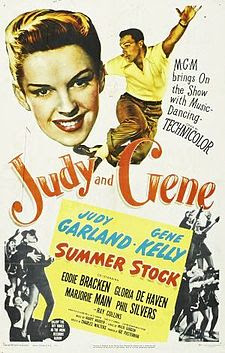 Directed by Charles Walters, Summer Stock (1950) is the third and final pairing of Judy Garland and Gene Kelly, two of the greatest musical performers of all time. Many classic movie fans regard it as the best of their pictures together, not only because of their own performances and songs but also because of the first-rate cast in the supporting roles, including Marjorie Main, Eddie Bracken, Phil Silvers, and Ray Collins. Although the story is just another variant of the “let’s put on a show” plot, the comedy and musical numbers make Summer Stock worth watching, especially for fans of the hilarious Phil Silvers.

Struggling farmer Jane Falbury (Garland) isn’t pleased when her spoiled younger sister, Abigail (Gloria DeHaven), returns home with a company of actors in tow, but Jane agrees to let the group stage their production in the barn in exchange for their help around the farm. Jane’s fiancé, Orville (Eddie Bracken), is even less happy about the arrangement, especially because the leader of the group is handsome Joe Ross (Kelly). Despite Jane’s engagement and Joe’s relationship with Abigail, romantic sparks fly as the two get to know one another and work together to accomplish their goals.

Garland’s problems at the time of the production have been thoroughly canvassed by film historians and those who knew her, but the strain that caused her to leave work on Annie Get Your Gun (1950) isn’t visible on screen. She looks heavier, certainly, but the more solid figure works to the advantage of her character, a working farmer, and her opening and closing numbers burst with that iconic Garland power. “Get Happy,” which serves as the film’s finale, doesn’t really fit into the rest of the movie but is such a great performance that nobody really cares. Kelly demonstrates his usual charm and prowess, and his solo dance number in the barn proves one of the high points of the picture.

While the leads stay busy doing the romance thing, the supporting players create comic chaos, and any one of the comedians featured could steal a film right out from under the stars’ perfectly shaped noses. Eddie Bracken blusters, blunders, and sneezes as Jane’s flustered fiancé, and Marjorie Main serves up a hearty helping of her usual “Ma Kettle” character. Phil Silvers, however, gets all the best laughs with his antics and constant stream of jokes. His first number with Kelly, “Dig-Dig-Dig Dig for Your Dinner” is funny enough, but the show stopper is “Heavenly Music,” which features Kelly and Silvers dressed as hillbillies, complete with giant rubber feet and a chorus of barking dogs.

This review was originally posted on Examiner.com. The author retains all rights to this content.

For more about Judy Garland, read "10 classic movies starring Judy Garland" on Examiner.com.
Posted by Jennifer Garlen at 10:41 AM