Classic Films in Focus: THE BACHELOR AND THE BOBBY-SOXER (1947) 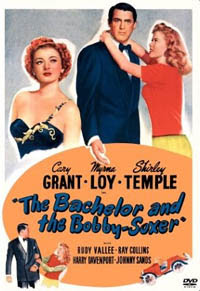 One thinks of Shirley Temple as a perpetual child, tap dancing her little heart out in those short dresses and pin curls. It comes as something of a surprise, then, to see her as a teenager in The Bachelor and the Bobby-Soxer (1947), but it's a pleasant surprise. She's a very good comedienne in a very entertaining picture, with Cary Grant and Myrna Loy keeping her excellent company in this classic screwball comedy.

The plot gives Temple plenty to do. Her character, Susan, all too eager to be thought of as mature, falls for Grant's Richard Nugent, just as Nugent finds himself hauled into court before Susan's older sister, Margaret, who is a judge. Hilarity ensues as Susan and Margaret's various suitors attempt to defend their territories against the charms of Richard, while their matchmaking uncle, played by the wonderful Ray Collins, schemes to get all of them exactly where he wants them. Of course it all turns out right in the end, but the appeal of screwball comedy is in the journey to a known destination. We know from the start that Richard and Margaret are fated for romance.

Grant performs his best version of himself here, always urbane but constantly stymied by the chaos going on around him. In that sense the film is very like Bringing Up Baby (1938), but Myrna Loy's Margaret Turner is more or less the opposite of Katharine Hepburn's wacky Susan Vance. Margaret is the cerebral, logical one, but she's not immune to the charisma that emanates from the artistic Richard, who is hilariously imagined by both Susan and Margaret as a knight in shining armor. The obstacle course scene is also a high point, with Susan's high school friends ensuring that Richard takes the coveted trophy away from his nemesis and rival for Margaret's affection (played with relish by Rudy Vallee).

Overall, the movie offers a very progressive image of women in the 1940s. Margaret is a good judge, and nobody questions her abilities or right to hold such an office. Susan changes her career goals every week, but she dreams big, and her relatives never suggest that such dreams are inappropriate for young girls. During a date with Richard, Margaret casually mentions that both of her parents were attorneys, and this information is allowed to pass without any remark about the rarity of female attorneys in the 1930s. The Turner women are smart, active, high achievers, and everyone else had better be fine with that.  It's a refreshing attitude for a film from this period to take.

Don't miss the "You remind me of a man" patter that gets repeated a few times over the course of the film. It's the most famous part of the whole movie, having inspired David Bowie's "Magic Dance" song in Labyrinth (1986) and The Atomic Fireballs song, "Man with the Hex," which appeared on the soundtrack for American Pie (1999). For more of teenaged Shirley Temple, see Since You Went Away (1944) and Fort Apache (1948). Myrna Loy and Cary Grant also costar in Mr. Blandings Builds His Dream House (1948). Loy is best remembered today as William Powell’s leading lady in The Thin Man (1934) and its sequels, but she worked in Hollywood for almost sixty years and made many excellent pictures. For more of Cary Grant’s romantic comedies, see The Awful Truth (1937), The Philadelphia Story (1940), and People Will Talk (1951).

This review originally appeared on Examiner.com. The author retains all rights to this content.
Posted by Jennifer Garlen at 10:48 AM