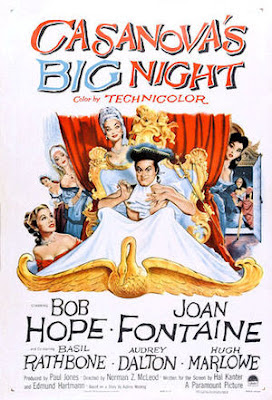 You'd think a star-studded costume comedy like Casanova's Big Night (1954) would have everything it needed to be a huge success, but it never quite comes together. Perhaps it's Bob Hope's awkward brand of humor that doesn't quite suit the material, or the embarrassment of seeing heavyweight character players like Basil Rathbone, Joan Fontaine, John Carradine, Lon Chaney, Jr., and even Vincent Price being largely thrown away on half-hearted gags. The real shame is that a cast like that ought to be enough to make any picture work, and there really are a couple of interesting moments scattered throughout the film, but overall it fails to live up to its evocation of the legendary lover and his romantic adventures.

Bob Hope plays Pippo, a nervous tailor who impersonates the real Casanova (Vincent Price) in order to woo an attractive widow (Joan Fontaine). When Casanova himself skips town to avoid his creditors, Pippo is coerced into playing his part in a complicated scheme involving a lovely young bride (Audrey Dalton) and the embroidered petticoat on which her family's honor depends. Casanova's valet (Basil Rathbone) joins the widow to help Pippo carry out the deception and obtain the petticoat, but Pippo begins to have second thoughts about his part in the plan when he gets to know the innocent young woman whose marriage will be ruined should he succeed.

Hope can be very funny, but his scenes in Casanova's Big Night mostly fall flat. His best moment might be his drag impersonation of a foreign dignitary, although he never really seems to have much enthusiasm for his role. Vincent Price disappears completely after the first few minutes, which is too bad because a comedy about Price's misadventures as the scoundrel Casanova might have been a lot more interesting. Basil Rathbone seems almost ashamed of himself for being in the picture, and his fencing talents are underutilized in a film that would have been perfectly suited to swashbuckling action. Of the lot, Joan Fontaine probably gets the best opportunity to work her material, and we see her dueling with swords, rowing gondolas, brandishing skillets, and disguising herself as a man in various entertaining scenes. Other notable stars, like John Carradine, Lon Chaney, Jr., and Raymond Burr turn up in small parts that don't particularly do them justice.

The breaking of the fourth wall at the end of the picture strikes me as contrived and overly cute, perhaps because Hope is so smarmy. Normally a little meta-humor is a welcome addition, but here it just feels like the movie painted itself into a corner and couldn't come up with a better way to end. Paramount rolled out the bells and whistles for this production, with splendid Technicolor costumes by Edith Head and plenty of showy set pieces, but these embellishments can't make up for the basic lethargy of the story and its protagonist.

If you like swashbuckling comedies, try The Court Jester (1955) instead. A comparison of the two pictures reveals everything that Casanova's Big Night could have done better but didn't. For a better Bob Hope comedy, see The Ghost Breakers (1940). Look for the other stars of this forgettable picture in many of Hollywood's most memorable movies, including The Adventures of Robin Hood (1938), Rebecca (1940), The Wolf Man (1941), and Laura (1944).
Posted by Jennifer Garlen at 5:17 PM