Classic Films in Focus: PHANTOM OF THE OPERA (1943) 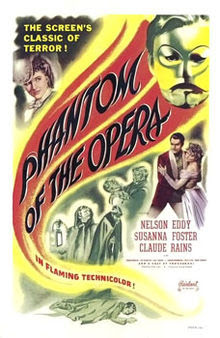 Lon Chaney set the standard for Phantom of the Opera performances way back in 1925, and it’s no surprise that later adaptations of Gaston Leroux’s original tale have failed to measure up to the iconic silent classic. The 1943 version, directed by Arthur Lubin and starring Claude Rains in the title role, plays fast and loose with its source material but cannot improve upon it, despite a lavish Technicolor treatment. As pretty as it is, Phantom of the Opera ultimately lacks both terror and interest, largely because it focuses more on its less compelling normal characters than on its tragic central figure, who ought to be its protagonist from beginning to end.

In terms of its plot, Phantom lies halfway between the 1925 film and the 1953 horror feature, House of Wax (or even the original 1933 Mystery of the Wax Museum). Unlike those films, however, it prefers melodrama and long musical segments to actual horror. As a result, the majority of the picture focuses on the romantic triangle represented by Susanna Foster, Nelson Eddy, and Edgar Barrier, all of whom are maddeningly dull. The opera scenes might be entertaining to fans of the art form, but they do little to build suspense in the narrative. The romance also stumbles because Christine’s two suitors are so alike that it hardly matters which of them she might prefer, an issue that is, perhaps, winked at in the story’s final scene. 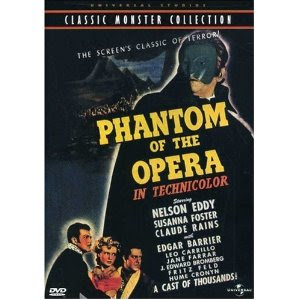 The film’s greatest failing, however, is its wasted opportunity with Rains, a tremendously gifted actor who had proved his talent for horror in The Invisible Man (1933) and The Wolf Man (1941). Unfortunately, Rains has very few scenes in Phantom in which to develop his take on the character. We see enough of Erique to pity him before his psychotic break and fatal encounter with a pan of acid, but we don’t see nearly enough of his existence and menace as the Phantom. His inevitable abduction of Christine is rushed through in the last segment of the film, giving almost no time to the subterranean world that the Phantom haunts. The casting of Rains in the role has the potential to be a stroke of genius, but we never see it realized, which makes the movie all the more frustrating to watch. Unleashed, the actor might have brought the Phantom all of the passionate madness, mystery, and tragedy that such an iconic character deserves.

Despite these problems, Phantom of the Opera won Oscars for Best Art Direction and Best Color Cinematography, with nominations for its musical score and sound. For better opportunities to appreciate the inimitable Claude Rains, see The Adventures of Robin Hood (1938), Casablanca (1941), and Notorious (1946). Of the other leads, Edgar Barrier had the best career; you’ll find him in Journey into Fear (1943), Nob Hill (1945), and as the ill-fated Banquo in Orson Welles’ adaptation of Macbeth (1948). Don’t miss Fritz Leiber (the father of the science fiction author of the same name) as Franz Liszt and Hume Cronyn as Gerard. For comparisons beyond the Lon Chaney version and other Phantom adaptations, have a look at Laird Cregar’s terrific performance as the musician made madman in Hangover Square (1945).

This review was originally published at Examiner.com. The author retains all rights to her content.
Posted by Jennifer Garlen at 1:03 PM