Classic Films in Focus: THE MASQUE OF THE RED DEATH (1964) 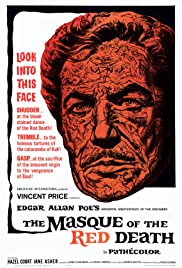 The Masque of the Red Death (1964) is another of Roger Corman's loose adaptations of the stories of Edgar Allan Poe with Vincent Price in the starring role, this time as the debauched and heartless Prince Prospero, a ruler who holds lavish parties while his people die of a horrific plague. Like most of the Poe films it takes many liberties with the source material and also incorporates the characters and plot from another Poe story, "Hop-Frog," but its deviations don't detract from its delights as a film. Lurid, lavish, and full of the usual Corman elements, it's a grim but entertaining morality tale that depicts the just desserts meted out to cruel and uncaring oligarchs who foolishly believe themselves to be immune to the afflictions that stalk their subjects.

Price is in high villain style as the sadistic Prospero, who shuts himself and his cronies off from the plague stricken countryside for a massive party inside the safety of the castle walls. He abducts a beautiful young village girl, Francesca (Jane Asher), with the intention of corrupting her innocence and seducing her into the service of Satan, and he uses her captured father (Nigel Green) and lover (David Weston) as leverage to keep her by his side. Prospero's jealous lady, Juliana (Hazel Court), dares the ultimate sacrifices to Satan to ensure her own position with the prince, even as the gathered nobles drink and debase themselves throughout the castle. Little does Prospero guess that a mysterious red robed figure is slowly but surely bringing doom to the revelers.

The romantic plot involving Francesca and her intended, Gino, delays the fate that awaits the corrupted court, but there's never any doubt about the ending of this tale. We only wonder whether Francesca and Gino, along with Hop Toad (Skip Martin) and the diminutive dancer Esmeralda (Verina Greenlaw), will escape the punishment so richly deserved by the rest. The personified Red Death opens the film with the promise of liberation for the people, but it's soon clear that liberation from Prospero might also mean liberation from life. Plagues, as we know, aren't very precise when it comes to such matters. The build up, then, is more about how much the story can make us anticipate and enjoy Prospero's downfall; we see him burn the village, murder the people, humiliate his courtiers, and even murder his followers when the mood strikes him. He is utterly faithless and without redeeming qualities of any kind. He delights in the suffering and debasement of others but believes himself untouchable. Thus, when the third act finally arrives, we have to cheer as Prospero first glimpses that flash of forbidden red in the midst of the masquerade.

Price, of course, makes for a delightfully satisfying villain, by turns preening and predatory in his sumptuous robes. Prospero is one of his more serious horror heavies, neither hysterical nor ludicrous, but very much in his comfort zone during this period of his career. Hazel Court makes a solid costar as the increasingly desperate Juliana, although she spends a lot of her screen time staring at Prospero or his Satanic altar, but Jane Asher seems a bit dazed as Francesca, which might be intentional but drains her of the ability to express the horror and disgust one might expect her to show. The bad dubbing for Verina Greenlaw undermines the pathos of her big scene with Skip Martin as Esmeralda and Hop Toad plan their escape, but Martin has some very good moments with Patrick Magee as the secondary villain, Alfredo.In fact, Hop Toad's revenge on Alfredo might be the most shocking scene of the picture, especially if you haven't read Poe's story.

Posted by Jennifer Garlen at 9:00 PM