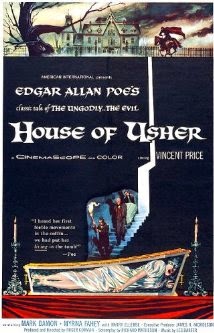 Roger Corman's series of Poe adaptations begins with House of Usher (1960), which sets the tone for the later films and establishes Vincent Price as Corman's ideal Gothic figure, a cultured, romantic, but fatally haunted central character entangled by strange twists of fate. Screenwriter Richard Matheson takes liberties with Poe's original tale but remains true to its essence, while Corman uses art and Price's tremendous screen presence to invest the proceedings with an air of sophistication in spite of the director's reputation for low-budget cult productions. If one doesn't insist too much on strict fidelity to the source material, the Corman Poe films are all great fun, and House of Usher makes an excellent introduction to the ghoulish thrills that follow it.

Price takes center stage as Roderick Usher, a solitary gentleman peculiarly afflicted by acute sensitivity. Roderick is not pleased when Philip Winthrop (Mark Damon) intrudes on the Usher mansion looking for Madeline (Myrna Fahey), who is Roderick's sister and Philip's intended bride. Philip resolves to take Madeline away from the crumbling house and the morbid obsessions that seem to plague both siblings, but Madeline's sudden death defeats his schemes. Soon he discovers that Roderick may have buried his sister somewhat prematurely, with fatal consequences for everyone associated with the house of Usher.

There can be no spoilers in a story so well known, and House of Usher telegraphs its conclusion insistently, so that we only wait to see how the inevitable end comes and not whether it will happen. Inexorable doom descending is, after all, a favorite theme of the Poe tales. Corman and Matheson add some new wrinkles to the familiar story by making Madeline a much younger sister instead of a twin and by giving the originally anonymous narrator a more pointed identity as Madeline's love interest. The film also eschews the story's hints at incest and provides a truly sordid collection of sinners to justify the familial curse; Roderick and Madeline have quite a family tree of murderers, thieves, and madmen, and Roderick firmly believes that any future progeny will only perpetuate the crimes of their forebears. Eerie paintings by Burt Shonberg (credited as Burt Schoenberg) evoke the Ushers' perversions and add an element of nightmare to the ruined house. They also prepare us for a dream sequence straight out of German expressionist horror, in which Philip assumes the role of a Gothic heroine, fearfully searching the house only to encounter the leering ghosts of the Usher ancestors.

Damon, Fahey, and Harry Ellerbe as the old family servant all play their parts capably enough, but the movie belongs to Vincent Price from the moment he appears on screen. Price was not quite fifty when he made the picture, and he was already established as a horror star with roles in The Invisible Man Returns (1940), House of Wax (1953), and House on Haunted Hill (1959). The Corman Poe movies are perfectly tailored to Price's talents; his rich voice, aristocratic bearing, and ability to play both true horror and winking black comedy all contribute to his success as a variety of Poe protagonists, starting with the overwrought Roderick. We never know for certain if Roderick is insane or if the house really does pulse with generational evil, but Price depicts Roderick's conviction as absolute. It's a shame that we don't get to hear Price recite Roderick's poem, "The Haunted Palace," in this picture, especially since the 1963 movie of that title is actually adapted from H.P. Lovecraft and is not a Poe story at all. Luckily, we get such a bevy of great performances from Price in the later Corman films that it's ungrateful to complain too much about the small things that get left out.

For more of the best Corman collaborations with Vincent Price, see Pit and the Pendulum (1961), The Masque of the Red Death (1964), and The Tomb of Ligeia (1964). For later Price horrors, try The Abominable Dr. Phibes (1971), Theatre of Blood (1973), and Madhouse (1974). Mark Damon's other acting credits include Young and Dangerous (1957), Black Sabbath (1963), and a number of Italian horrors and Westerns, but he has also enjoyed a very successful career as a producer and is still working in 2014.

Posted by Jennifer Garlen at 8:04 PM