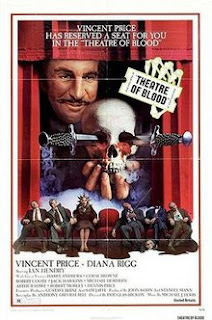 As gruesome as its murders are, Theater of Blood (1973) belongs much more to the genre of pitch black comedy than horror, given the gloriously ludicrous nature of the whole picture, but it's a dark comedy whose best jokes can only be appreciated by those with a knowledge of Shakespeare that goes well beyond the balcony scene in Romeo and Juliet or Hamlet musing to Yorick's skull. For English literature majors whose tastes also run to absurd horror comedy and Vincent Price, Theater of Blood is basically a perfect film, and since I'm squarely in that demographic I have nothing but praise to offer for this weird, wonderful gem from director Douglas Hickox and screenwriter Anthony Greville-Bell. It's a good thing, too, since I wouldn't want the vengeful spirit of Edward Lionheart to come after me for trashing his performance.

Vincent Price plays Lionheart, a demented Shakespearean actor who returns after his apparent suicide to exact revenge on the theater critics who panned his acting and denied him their highest prize. Aided by a group of meth addled homeless people and a mysterious sidekick, Lionheart lures his detractors to suitably Shakespearean fates that recreate scenes from the plays in his final performance season. As each new murder occurs, the surviving critics become more and more anxious about their own safety, but the London police seem utterly unable to protect them from Lionheart's grisly schemes. Meanwhile, Lionheart's daughter, Edwina (Diana Rigg), claims that her father is really dead and protests her ignorance of the crimes to the police and the head critic, Peregrine Devlin (Ian Hendry), the only one of the bunch who seems to acknowledge some karmic justice at work in Lionheart's actions.

Price is the main attraction throughout, but several of the supporting performances are also memorable, especially Diana Rigg as Lionheart's loyal daughter. She never exhibits the hammy lunacy that Lionheart revels in, but Edwina's sang froid proves to be just as unnerving in its own way, especially as the third act reveals its barely hidden secrets. Ian Hendry is the most significant of the critics, partly because Devlin lives longer than the others and thus gets more screen time, but Robert Morley is absolutely scene stealing as the gluttonous dog lover Meredith Merridew, who dies in a truly bizarre recreation of the most bizarre of Shakespeare's plays, Titus Andronicus. Also noteworthy is Jack Hawkins in one of his final screen appearances as Solomon Psaltery, whom Lionheart tricks into strangling his wife (Diana Dors) in a jealous rage, just like the murder of Desdemona in Othello. Most of the other victims die too quickly to have that much to do, but fans of classic British films will appreciate the presence of Dennis Price, Harry Andrews, Coral Browne (who would become Price's third wife), Robert Coote, Michael Hordern, and Arthur Lowe, as well as Milo O'Shea as the baffled police inspector.

Theater of Blood goes all in on its Shakespearean theme, loading little jokes and references into the names of both people and places, but since the murders hinge on specific scenes from the plays it's more important to know those than to know why the derelict theater is named the Burbage (for Richard Burbage, the Elizabethan actor) or that Edwina's disguise is a nod to the popularity of the "breeches roles" in the Bard's canon. The movie doesn't content itself with the most familiar and frequently performed plays, choosing instead to depict scenes from Troilus and Cressida, Cymbeline, Henry VI, Part One, and Titus Andronicus as well as more popular works like Julius Caesar, Romeo and Juliet, King Lear, Richard III, and The Merchant of Venice. Aside from the Titus Andronicus murder, the most entertaining of the lot might well be the drowning of Oliver Larding (Robert Coote) in the vat of wine, mainly because it was Vincent Price himself who met the same end when he played the Duke of Clarence in the 1939 film, Tower of London, as well as then playing Richard III in Roger Corman's 1962 remake, also called Tower of London. That's a lot of meta-humor packed into a single segment of the movie, but it's the kind of thing that becomes possible thanks to Price's long career and penchant for both period dramas and campy horror roles. (Do take a moment to enjoy the prominent placement of the name "Clarence" over the door of the shop where the wine tasting occurs.) The ending reworks the father and daughter pathos of King Lear with Edwina as a rather ironic Cordelia but Lionheart very much in the right mode as the mad monarch, although Lear hadn't committed a series of inventively ghoulish murders as part of his particular brand of insanity. I won't say that Lionheart is more sinned against than sinning, but he, like Lear, probably would.

If skewed Shakespeare suits your taste in films, try pairing Theater of Blood with Rosencrantz & Guildenstern are Dead (1990), Scotland, Pa. (2001), or the memorably terrifying Throne of Blood (1957), which is Akira Kurasawa's Japanese interpretation of Macbeth. For more murderous obsessions let loose, check out Fade to Black (1980), in which classic movies serve as the subject of the killer's fixation. Vincent Price's career spanned more than fifty years, but for other horror films from the early 70s try The Abominable Dr. Phibes (1971), Dr. Phibes Rises Again (1972), or Madhouse (1974). Dame Diana Rigg, who died in September of 2020, is particularly remembered for her iconic roles in On Her Majesty's Secret Service (1969) and the TV series, The Avengers (1965-1968), but I'm personally very fond of her in The Great Muppet Caper (1981) and the delightfully droll series, The Mrs. Bradley Mysteries (1998-2000).

Posted by Jennifer Garlen at 6:41 PM