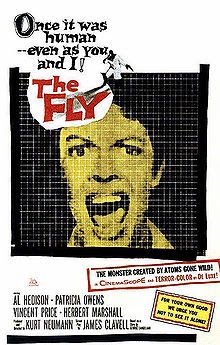 The original 1958 version of The Fly was such a hit that it spawned multiple sequels and the well-known 1986 remake with Jeff Goldblum, but it’s actually a lot less horrific than first-time viewers might assume. That famous ending, with the hideous man-fly screaming for help, is certainly over-the-top horror hysteria, but the rest of the picture is more inclined to take itself seriously. At its heart, The Fly is a love story about a young couple whose happiness is shattered by the husband’s dangerous pursuit of science. It works, too, thanks mostly to the performances of David Hedison and Patricia Owens as the lovers caught in fate’s insidious web, although horror fans will also appreciate the presence of genre icon Vincent Price as the doomed inventor’s brother.

David Hedison (credited as Al Hedison) stars as Andre Delambre, a brilliant scientist who invents a matter transmitting device in his basement lab. His experiments go horribly wrong when he tests the invention on himself and unwittingly transports a fly at the same time. Hideously mutated and rapidly losing control over his insect parts, Andre asks his wife, Helene (Patricia Owens), to help him commit suicide and destroy all evidence of the dangerous research. When she complies, Helene faces a murder investigation, but Andre’s brother, Francois (Vincent Price), works desperately to save his sister-in-law and convince the police inspector (Herbert Marshall) that her story is the truth.

The film opens with the death of Andre, so the audience is never in suspense about his fate. As the scientist who transgresses against the boundaries of nature, Andre’s demise might even be warranted, although the film prefers to cast him as a martyr to scientific progress. Helene’s more personal struggle in the aftermath provides the narrative’s tension; will she be executed for murder or committed to life in an insane asylum? Both outcomes spell disaster for her and her young son, but her story, when she finally agrees to tell it, seems far too incredible to be real. Francois, who has long been in love with Helene, acts as the amateur detective trying to figure out the mystery of Andre’s death and Helene’s part in it. Unlike Inspector Charas, Francois knows enough about his brother’s research to believe that such an invention might have been possible, even if all of the evidence has been destroyed. The proof that he finally finds is so shocking that he and Charas are thrust into the same position as Helene, driven to destroy life in spite of their own principles.

CinemaScope photography gives a sense of grandeur to the bizarre story, even though most of the action takes place indoors. The actors also bring gravitas to the narrative with their serious performances. Vincent Price in particular plays it straight and fills the role of the thoroughly human Francois instead of the monstrous Andre. By 1958, Price had already starred in horror features like The Invisible Man Returns (1940) and House of Wax (1953), but he was not yet entrenched in the campier work of William Castle or Roger Corman; House on Haunted Hill (1959) would not appear until the next year, with Corman's House of Usher following in 1960. Herbert Marshall lends the movie even more dramatic weight by playing the skeptical police inspector; an actor known primarily for films like The Letter (1940) and Foreign Correspondent (1940), Marshall serves as an anchoring presence, assuring us that this tragic tale is meant to be taken to heart. Patricia Owens and David Hedison are at their best in the scenes that depict their happy marriage before the fateful accident; once Hedison dons the fly head, he has to project Andre’s misery through the use of his one human hand, while Owens must deliver the inevitable reaction shot when Andre’s inhumanity is finally revealed. It is Owens who gets to make the film’s most prescient, and perhaps ironic, statement about the speed at which progress changes human life. “I get so scared sometimes,” she says. “The suddenness of our age!” We have to wonder what she would think of the world nearly 60 years later.

Director Kurt Neumann made The Fly near the very end of his career; for examples of his earlier work try Tarzan and the Amazons (1945), She-Devil (1957), and Kronos (1957). Look for David Hedison in The Lost World (1960) and Live and Let Die (1973). Patricia Owens stars in The Law and Jake Wade (1958) and The Gun Runners (1958). Herbert Marshall also ventures into horror territory in Gog (1954), but be sure to appreciate him in the clever Pre-Code heist comedy, Trouble in Paradise (1932). Vincent Price reprises his role as Francois Delambre in the 1959 sequel, Return of the Fly. The final installment, Curse of the Fly (1965), continues the story of the Delambre family but stars Brian Donlevy and George Baker.
Posted by Jennifer Garlen at 4:21 PM