A LEGO Treat for Frankenstein Fans 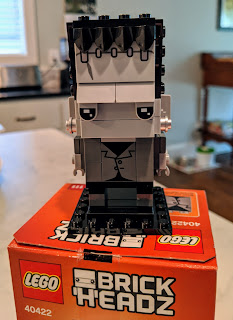 I'm always excited when my two obsessions - LEGO and classic movies - overlap, and when they do it's usually related to classic horror. This year LEGO has added something especially fun in time for Halloween, a new Brickheadz set for an official Universal Frankenstein! Fans are hoping that more licensed Universal monster characters will follow, but right now we just have the iconic creature first played on the big screen by Boris Karloff in James Whale's 1931 film.

The Brickheadz line has been very popular the last few years, running about $10 for a set that builds one character with an oversized head. Licensed characters have been especially plentiful, including lots of Star Wars figures, but seasonal ones like Santa Claus and the Easter Bunny have also been frequent additions to the lineup. Frankenstein's monster is a delightful new part of this series, rendered in shades of gray and black to better reflect the image of the Universal version of the character. If you're not into complex builds, don't worry; the Brickheadz take just a few minutes to assemble and make perfect cubicle or desk adornments and will also fit neatly onto a display shelf with your other classic horror collectibles. The box art is also wonderful, with Karloff's version of the creature prominently featured. 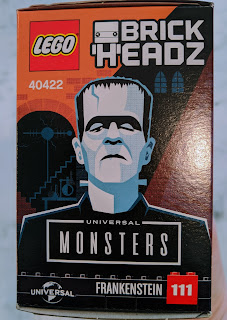 Over the years LEGO has released a number of sets and themes with obvious ties to classic horror, and they've always been fun, but this new, official connection with Universal makes me hope that we will see even more Brickheadz and minifigure scale sets in 2021. Right now the Hidden Side theme is my favorite collection of sets because of the spooky atmosphere and ghost figures, but a Dracula's Castle set would be a dream come true (it should have armadillos, of course, just to be extra faithful to the film). If and when LEGO releases information about upcoming Universal Monster sets, I'll be sure to let you know about it here on the blog!

If you want your own Frankenstein Brickheadz, you can find him on the LEGO Shop at Home website for $9.99. I don't have a LEGO store nearby, and with COVID it's difficult to travel to the closest one in the next state over, so I don't know if you can find the set at LEGO Stores, although I assume that you can if you have one near you. If you visit the website, be sure to check out the other fun Halloween items, including the Hidden Side theme and the gorgeous (but so expensive) Haunted House exclusive set.

Posted by Jennifer Garlen at 5:59 PM