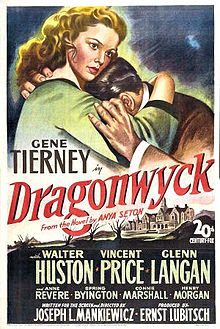 Although it’s not as well known today as Gothic thrillers like Rebecca (1940) and Gaslight (1944), Dragonwyck (1946) sprang from the tremendous vogue for romantic thrillers that those movies helped to establish during the 1940s. The picture was adapted from a 1944 novel by Anya Seton, and the late date of the source material helps us understand the story’s obvious affinities with du Maurier and her own muse, Charlotte Brontë. One of the first films directed by Joseph L. Mankiewicz, Dragonwyck boasts all the flourishes of the classic female Gothic, but its chief attractions are the exquisite Gene Tierney as the imperiled heroine and Vincent Price as her broodingly Byronic spouse.

Tierney stars as Miranda Wells, who thinks her dreams have come true when a distant relative summons her to serve as a companion to his young daughter (Connie Marshall). It soon becomes apparent, though, that the imperious Nicholas Van Ryn (Vincent Price) has other designs on his beautiful cousin, especially after his wife (Vivienne Osborne) mysteriously dies. Despite the romantic overtures of a handsome local doctor (Glenn Langan), Miranda falls under Nicholas’ dangerous spell, and soon her own life is threatened as Nicholas becomes increasingly deranged.

Both Fox players, Tierney and Price had already appeared together in films like Hudson’s Bay (1941), Laura (1944), and Leave Her to Heaven (1945), but Price has a much larger role in Dragonwyck and therefore gets more opportunity to exercise his tremendous screen presence. His Van Ryn is more restrained than the horror characters he would eventually play, but already the outlines of the later Corman characters are clear. Price was handsome enough for a leading man, as Dragonwyck proves, but his particular talent for a cruel twist of the mouth made him far more entertaining as an antagonist. He has an undeniable sexual appeal that makes Miranda’s attraction to him credible, even though the lines of his face and the sarcastic light in his eyes inform the audience of his character’s true nature. Tierney has a complex heroine to play, for Miranda has to remain sympathetic in spite of the flaws that lead her to her fate. Her beauty encourages us to forgive her, and Tierney is at her most lovely in her gorgeous period gowns. The two stars find capable support in the secondary cast, with Glen Langan as the opposite of Price in nearly every way, Walter Huston fiercely righteous as Miranda’s God-fearing father, and Anne Revere kindly as Miranda's loving mother. Spring Byington provides a delightfully creepy performance as the housekeeper, Magda, who ominously warns Miranda of the mansion’s dark past.

Like most of the Gothic thrillers of the era, Dragonwyck has its roots in Jane Eyre, which had gotten its own big Hollywood treatment in the 1943 picture starring Orson Welles and Joan Fontaine. Miranda differs from Jane because she has the benefit of concerned, practical parents who worry over her dreamy notions, but still we have the unhappy first wife, the brooding anti-hero, and the lonely child populating the shadowy, history-haunted halls of the ancestral estate. Dragonwyck breaks away from the narrative arc of the earlier work in its second half, but its deviations still draw upon the conventions of the traditional Gothic, particularly in its use of the vengeful, wandering ghost and its evocation of the old story of Bluebeard and his wives. Those who are interested in the Gothic tradition will find its parallels and variations fascinating, although the film occasionally errs, especially when it drops characters like Magda and the little girl, Katrine, without explanation about halfway through the story.

Look for beloved character actors Harry Morgan as tenant farmer Klaas Bleecker and Jessica Tandy as Miranda’s Irish maid, Peggy O’Malley. For more from Joseph L. Mankiewicz, try The Ghost and Mrs. Muir (1947), All About Eve (1950), and People Will Talk (1951). See Vincent Price in iconic horror roles in House of Wax (1953), House on Haunted Hill (1959), and Corman films like The Raven (1963) and The Tomb of Ligeia (1964). In addition to her previously mentioned roles, catch Gene Tierney in the wonderful Ernst Lubitsch classic, Heaven Can Wait (1943).

An earlier version of this review originally appeared on Examiner.com. The author retains all rights to this content.
Posted by Jennifer Garlen at 11:25 AM