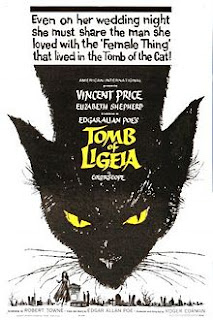 The last of Roger Corman’s series of Poe horrors, The Tomb of Ligeia (1964) has both admirers and detractors, although it often makes the lower levels of best-of lists of Corman’s films. In Corman terms Ligeia is a fairly restrained production, less inclined to morbidly humorous excess and more interested in subtle terrors evoked by encounters with the uncanny. As a Gothic thriller, The Tomb of Ligeia offers plenty of the conventional trappings of its genre, plus a particularly interesting double performance from Elizabeth Shepherd as both of the story’s central female characters. Corman’s favorite leading man, the inimitable Vincent Price, also stars in a characteristic role as the haunted anti-hero, and, as usual, his presence alone is enough to make the entire picture worthwhile.

The story concerns the doomed romance of high-spirited Lady Rowena (Shepherd) and reclusive widower Verden Fell (Price). From their first meeting, the two feel a powerful attraction to one another, even though Fell seems haunted by the memory of his dead wife, Ligeia (also played by Shepherd). Rowena marries Fell and tries to draw him out of his disturbing obsession, but it soon becomes clear that Ligeia’s power over him reaches far beyond the grave. 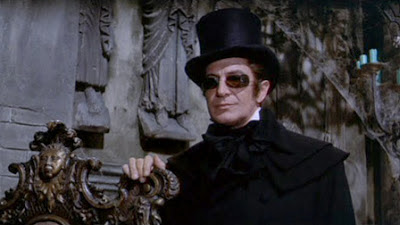 As usual, Corman treats Poe as an inspirational foundation but has little interest in strict adaptation, which might work in the film’s favor. The altered story provides Elizabeth Shepherd with not one but two juicy roles, and she succeeds admirably as both the lively Rowena and the deadly Ligeia. Transformed into a Gothic heroine, Rowena actively pursues and desires Verden Fell, while in Poe’s tale she is merely an unloved pawn in her family’s mercenary game. Price is thrillingly Byronic in his dark glasses and black suit, prone to fits of madness in the grip of his dead wife’s spell but struggling all the while to free himself and forge a new life with Rowena. As much as we want to see him gain the upper hand we know that the perverse sensibilities of Poe and Corman demand his destruction, and the feverish conflagration that concludes the picture is perfectly suited to the tastes of both.

The Gothic flavor of the picture owes a lot to its effective use of location, in this case the ruins at Castle Acre Priory near Swaffham, England. The outdoor scenes early on establish the sense of Fell’s home as a literal graveyard, a wrecked place where only the dead can thrive. The thrills introduced as the story progresses tend to be subtler, less gory affairs than one might expect; a fox’s corpse turns up in strange places, an evil cat lies in wait for Rowena, and a housemaid is unexpectedly transformed into a leering maniac. The film also introduces a blandly heroic counterpoint to Price in the person of John Westbrook, whose presence conforms to the conventions of the genre but adds little to the overall effect of the picture.

An earlier version of this review originally appeared on Examiner.com. The author retains all rights to this content.
Posted by Jennifer Garlen at 7:05 PM