Classic Films in Focus: THE PIT AND THE PENDULUM (1961) 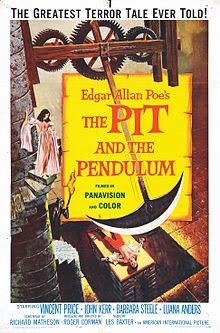 The Pit and the Pendulum (1961) rambles far afield of the original story by Edgar Allan Poe, even for a Roger Corman adaptation, but that doesn't prevent it from being an entertaining horror film. With Vincent Price and Barbara Steele both giving memorable performances and a gruesome story of adultery and torture providing the narrative thrust, The Pit and the Pendulum has plenty to offer viewers who enjoy Corman's distinctive style, and Richard Matheson's screenplay delivers a sly mix of Radcliffean Gothic and psychological suspense. While it can't really be considered as an adaptation of Poe's work, the movie stands on its own creative merits well enough to warrant the attention of horror fans, especially those who appreciate the macabre charms of Vincent Price.

Price plays Nicholas Medina, whose grief over the death of his young wife is interrupted by the arrival of her brother, Francis (John Kerr), from England. Francis insists on details about the demise of Elizabeth (Barbara Steele), forcing Nicholas and his sister, Catherine (Luana Anders), to reveal family secrets they would just as soon keep hidden. When strange events cause Nicholas to believe that Catherine was buried alive, Francis and Catherine struggle to get to the truth, but sinister machinations draw all of them to a fateful encounter in the torture chambers deep beneath the house.

Only the last ten minutes of the movie have any connection to the Poe story, but the original material is lurid enough to make for a good Gothic yarn, even if it isn't Poe. The screenplay concocts an elaborate narrative of betrayal and revenge against Poe's backdrop of the Spanish Inquisition, adding romantic intrigue and a haunted house element to flesh out the brief source material. We learn that Nicholas witnessed the brutal murders of his adulterous mother and uncle at the hands of his father when he was just a child. Already psychologically fragile, he seems poised on the verge of a complete breakdown when eerie happenings suggest that his wife's angry spirit is haunting the house in order to punish Nicholas for her premature burial. His doctor (Antony Carbone) advises him to leave the house forever, but Nicholas is drawn back to his wife's tomb and the horrid torture chamber where his father carried on the bloody work of the Inquisition.

The weakest link in the picture is John Kerr as Francis, who is something of a stick and too stiff-necked for us to care much about his fate. Playing the straight man against an actor like Price is never a rewarding job, but Francis could at least react when he's about to be cut in half by a giant pendulum. Antony Carbone also plays it very low-key as the doctor, leaving Luana Anders as the most interesting member of the household after Price himself. Barbara Steele is great in her few scenes, especially in the final act, but once again Price is the main attraction, coming unglued like Ingrid Bergman in Gaslight (1944) until he finally snaps. His pursuit of the ghostly Elizabeth through the cobwebbed secret passages drips with classic Gothic atmosphere, and the finale gives him a terrific mad scene in which to cut loose.