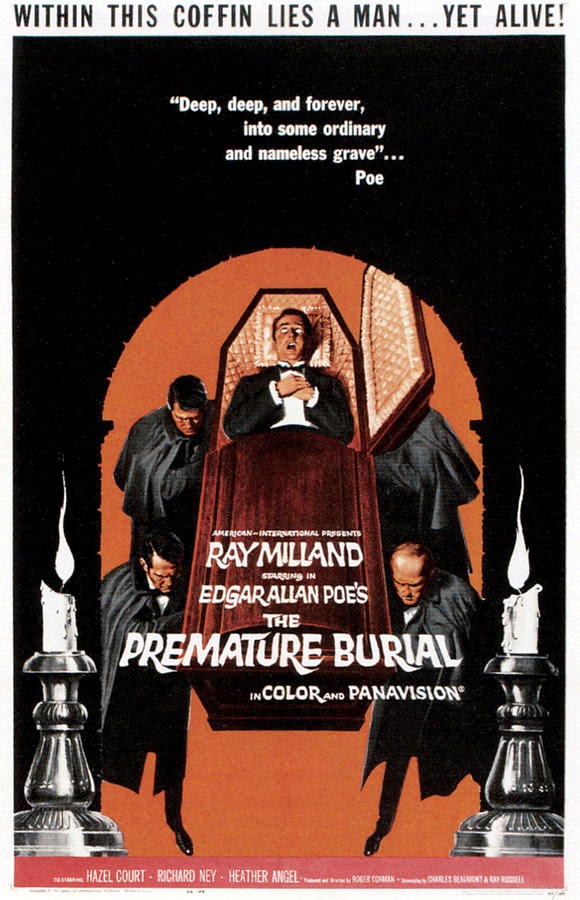 Ray Milland takes over from Vincent Price as Roger Corman's lead actor in The Premature Burial (1962), which builds a feature-length story of obsession and betrayal around a much simpler tale by Edgar Allan Poe. Price's absence makes this entry into Corman's Poe canon less of a favorite among classic horror fans, but those who appreciate Milland on his own merits will find him capable and even quite chilling in the picture's third act. Horror queen Hazel Court also gives a memorable performance, but those who like to see familiar stars in unusual roles will particularly enjoy the presence of Alan Napier and Heather Angel as supporting characters with their own motives for watching Milland's morbid protagonist succumb to his fears. Less deliriously Gothic than some of the best Poe pictures, The Premature Burial is nonetheless an entertaining contribution to the Corman collection and a good example of the horror director's distinctive style.

Milland plays Guy Carrell, a middle-aged gentleman gripped by his fear of being buried alive. Despite the objections of his sister, Kate (Heather Angel), Guy marries the lovely Emily (Hazel Court) and tries to be happy, but events around his home constantly remind him of his phobia. He builds an elaborate mausoleum for himself equipped with numerous escape routes, but when he suffers a bout of catalepsy and is mistaken for dead he is, of course, confronted with the realization of his worst nightmare.

Vincent Price is so closely associated with the Corman Poe movies that it's strange to see Ray Milland step into his place as the haunted protagonist, and Milland certainly plays Guy differently from Price's usual style. Early on he seems much more normal and sane than we might expect, his mania about death excepted, and we wonder why such a charming, ordinary man doesn't just shake off his grim daydreams and get on with his life. Milland's intensity bursts forth in his darker moments, when he rejects flowers and his wife's intrusions, but he really transforms into a figure of madness after his premature burial takes place and he sets off to punish everyone he holds responsible for his fate. This is, after all, the actor who won an Oscar for going on an epic bender in The Lost Weekend (1945), and when he cuts loose Milland shows that he really can work his way around a Gothic fit of violent insanity.

The other players also offer more subtle performances that complement Milland's approach to the protagonist, with the third act finally seeing each character's true nature revealed by the aftermath of Guy's interment. Hazel Court has a spectacular conclusion that justifies her presence, while Alan Napier's Dr. Gault turns out to be a much more heartless old scoundrel than his paternal demeanor suggests. Gault's grave-robbing expedition is the event that first propels Guy into his ongoing fear of live burial, but Gault is the kind of man who will have the corpse of his own son-in-law dug up for medical experimentation, so poetic justice practically begs to catch up with him. Heather Angel is the most inscrutable of the lot; she plays Guy's sister with impeccable reserve, so that we never know how she really feels about her brother and his wife until the very last scene. Richard Ney has the relatively thankless job of playing Miles, a foil to Milland's character who once courted Emily and still harbors strong feelings for her.

Corman presents viewers with the Victorian atmosphere and constant swirling fog that feature in so many of his Poe films, along with copious cobwebs and a handful of dry corpses. If the themes of catalepsy and live burial seem repetitive after House of Usher (1960) and The Pit and the Pendulum (1961), that has as much to do with Poe's obsessions as Corman's. The influence of German Expressionism and the importance of art also recur in this outing, with Guy's dream sequence awash in blue and green light and his surreal paintings depicting the disordered state of his mind. Corman also evinces a sly, twisted sense of humor in his use of the old song, "Molly Malone," as a persistent theme. We never hear the actual lyrics sung in the film, but the refrain of the song is "Alive, alive, oh," which serves as an ironic summary of Guy's obsession.

Like many classic stars, Ray Milland made a number of horror features late in his career, but for a great example of his earlier work in the genre see The Uninvited (1944). He also gives a standout performance in Alfred Hitchcock's 1954 thriller, Dial M for Murder. Look for Hazel Court in The Curse of Frankenstein (1957) as well as Corman's The Raven (1963) and The Masque of the Red Death (1964). Heather Angel appears in Suspicion (1941), The Undying Monster (1942), and Lifeboat (1944), but you might also recognize her as the voice of Mrs. Darling in Disney's Peter Pan (1953). Alan Napier is best remembered today as Alfred on the 1960s TV series, Batman, although his long career spanned more than 50 years and nearly 150 roles.
Posted by Jennifer Garlen at 11:14 AM