Classic Films in Focus: THE CURSE OF FRANKENSTEIN (1957) 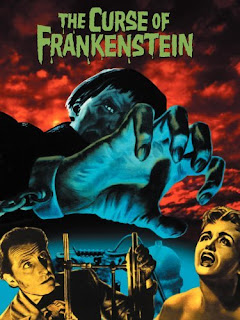 Although Mary Shelley's novel has been filmed many times, every adaptation of Frankenstein is unique, a point that The Curse of Frankenstein (1957) helps to prove. Director Terence Fisher's version of the Frankenstein story offers a different take than the iconic 1931 picture from James Whale; it brings in more Gothic atmosphere and revels in an early opportunity for full color gore. With Hammer stars Peter Cushing and Christopher Lee in the roles of the scientist and his monster, The Curse of Frankenstein has great appeal for fans of classic horror, and its deviations from the source material offer some fascinating commentary on the cultural evolution of Shelley's modern Prometheus.

Cushing plays Baron Victor Frankenstein, who comes into his title and his wealth at an early age and uses the opportunity to hire himself a tutor with expert qualifications in science. His chosen mentor is Paul Krempe (Robert Urquhart), who teaches the younger man everything he knows but eventually grows uncomfortable with the direction of Victor's research. Consumed by his desire to create life, Victor ignores his intended bride, Elizabeth (Hazel Court), although he does find time to carry on a callous affair with the resident maid, Justine (Valerie Gaunt). Eventually, Victor's efforts bring the Monster (Christopher Lee) into being, but the master cannot control his creation, despite numerous operations to alter the creature's brain.

Peter Cushing makes an excellent Frankenstein; he perfectly conveys the sneering narcissism of the aristocracy and looks both incredibly intelligent and insufferably aware of it. The character of Paul is created as a foil to Victor, and Robert Urquhart has an open, sincere expression that marks him as Victor's opposite; both men are technically scientists, but Paul imagines science as a way to help humanity, while Victor sees it as a path to godlike power. The two women also function as foils to one another; Hazel Court's Elizabeth is utterly innocent, unable to imagine that Victor might be capable of wrong, while Valerie Gaunt's Justine is a jealous schemer who attempts to blackmail Victor into marrying her. Both women mistake the character of their man, but Justine pays the steeper price for the error. There's a terrible irony in Victor's decision to let the monster destroy Justine after she reveals that she is pregnant with his child; he is choosing one kind of offspring over another, an act that symbolizes his rejection of the entire natural world. This is not the death that Justine suffered in Shelley's novel, but it fits with the film's interpretation of Victor's character and drives home the point that Shelley makes about the protagonist as a figure of paternal failure.

When he finally appears, Christopher Lee's creature reveals an appearance more zombie than golem, with a green, decayed face and one pale, clouded eye, but like Karloff's character he lacks the powers of thought and speech. An early scene in which Victor describes the beautiful hands he has stolen for his creature helps to explain why Lee's own elegant, tapered fingers extend from his sleeves while his heavily made-up face presents such a mockery of human expression. He's certainly harder to look at than Karloff, but he's also more fragile and pathetic, especially after Victor resurrects him for a second time and begins carving up his already damaged brain. The lion's share of the story belongs to Cushing's amoral, ambitious Victor, but Lee does his best with his limited role, although it would have been interesting for Hammer to hew more closely to Shelley's novel and let Lee's tremendously eloquent intelligence inhabit that patchwork frame. A year later, Horror of Dracula (1958) would offer the pair more evenly matched opponents with Cushing as Van Helsing and Lee as the bloodthirsty count.

For more of classic Cushing and Lee, go on to Horror of Dracula and then to The Mummy (1959). Both enjoyed long careers with particularly good roles late in life; look for Cushing as Grand Moff Tarkin in Star Wars (1977) and Lee as Saruman in The Lord of the Rings trilogy and as Count Dooku in the Star Wars prequels. You'll find Robert Urquhart as Gawaine in Knights of the Round Table (1953), but he had better success with television than he did in films. Scream queen Hazel Court appears in The Raven (1962) and several other Roger Corman horror films. Hammer fans might appreciate the Turner Classic Movies DVD set that includes The Curse of Frankenstein as well as Horror of Dracula, Dracula Has Risen from the Grave, and Frankenstein Must Be Destroyed.

An earlier version of this review originally appeared on Examiner.com. The author retains all rights to this content.
Posted by Jennifer Garlen at 10:44 AM