Modern Movies: GUARDIANS OF THE GALAXY (2014) 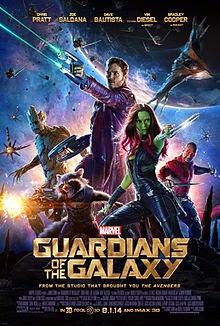 The newest Marvel comic book movie to hit theaters, Guardians of the Galaxy asks viewers to embrace otherwise obscure characters and get beyond the more obvious icons presented by The Avengers or DC's constant reworkings of Batman and Superman. Moreover, director James Gunn blatantly rejects the trend toward darkness by making a film that is almost silly enough to be a parody of the summer comic book blockbuster genre. Stephanie Zacharek of The Village Voice has already criticized the movie for being too "Fun!" and self-conscious of its own humor, but for those of us who have been sick to death of dark this and dark that Guardians is a welcome breath of fresh air. Yes, this movie is silly and Fun! - as Zacharek puts it - but it also has a surprisingly sentimental core, and in spite of some crude language and humor it's one of the most family-friendly superhero movies in a very long time.

Chris Pratt plays Earthling Peter Quill, who was abducted by aliens just after the death of his mother, when Peter was still a child. Twenty years later, he roams the galaxy as a thief and junk trader, and the action is set into motion when he steals a strange orb that everyone seems to want. Arrested and thrown into prison, Peter strikes up an uneasy partnership with green assassin Gamora (Zoe Saldana), tortured muscle man Drax (Dave Bautista), gentle tree being Groot (voiced by Vin Diesel), and bad-tempered talking raccoon Rocket (voiced by Bradley Cooper). The group become unlikely heroes as they try to protect the galaxy from the orb's power and the evil plans of Ronan (Lee Pace), Nebula (Karen Gillan), and the mysterious overlord, Thanos (Josh Brolin).

Like other comic book blockbusters, Guardians has plenty of explosions and CGI action. Aliens, spaceships, and exotic worlds are onscreen in abundance. It also has plenty of notable stars to swell its ranks: Glenn Close, John C. Reilly, Benicio de Toro, and Djimon Hounsou all make appearances, and of course there's a cameo by Stan Lee. (Joss Whedon fans will also be amused by totally unrecognizable cameos from Nathan Fillion and Alexis Denisof.) These are things that fans expect when they come to this sort of picture, and Guardians delivers them in spades.

The movie could have been a lot darker in the hands of a different director and cast, but Guardians goes for fun rather than self-important seriousness, and, Village Voice criticism aside, that's a great decision. Imagine the movie if Christopher Nolan had made it, and now see it as it actually is. There's plenty of room in which Guardians might have gotten heavy; the characters have all suffered terrible personal losses, both Nebula and Gamora have been turned into genetically altered killing machines, and even Rocket is the product of some unspeakably awful experimentation. The Collector is a terrifying being if you start dwelling on him and the lives of his prisoners. Guardians doesn't ignore these elements, but it leavens them with the characters' quirkier aspects and the life-affirming themes of friendship and the chosen family. Our characters might have succumbed to darkness, but they find each other, and that makes all the difference.

When I took my entire family to see the movie, we all laughed and even cried with these characters. My 13 year old daughter fell in love with Rocket and Groot, and the post-credits scene had us older comic book readers snorting with amusement. We have been waiting for this movie ever since the first "Hooked on a Feeling" trailer ages ago, and Guardians of the Galaxy delivered everything we were hoping it would bring. We had a lot of fun. Sometimes, honestly, that's exactly what people need.

Here's an excellent review by Movie Mom film critic Nell Minow, if you still need convincing to take the kids and see Guardians this weekend.

Posted by Jennifer Garlen at 10:10 AM