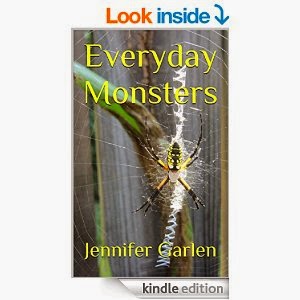 This weekend I got my short story collection, Everyday Monsters, posted on Amazon Kindle, where it now awaits the lavish praise of at least a dozen readers, not including my mother, who doesn't want me to become too conceited by thinking that I might be "all that." Everybody knows that short stories don't sell, but being obsessed with classic horror and shows like The Twilight Zone I wrote them anyway. A word of warning to you classic horror fans out there - this is the kind of thing that is liable to happen to you if you watch too much Boris, Bela, and Lon, not to mention too many episodes of Alfred Hitchcock Presents. Anyway, the seven stories in the collection represent a strange melange of influences from classic movies, literature, and my studies of feminist theory in graduate school. Here's a breakdown of some of the references and allusions in each story, which I hope will inspire at least three more people to go over to Amazon and have a look at the book itself.

"The Spinsters" - I have to be coy here to avoid spoiling the big twist, but I can say that there's a lot of Arsenic and Old Lace informing the characters of Louisa and Letitia. They're also based on my real-life dotty old aunts, Birdie and Sis, who were absolutely weird enough to fuel an entire career for any writer. I love wacky old ladies, especially in movies; I adore Una O'Connor, Hermione Gingold, Dame May Whitty, and all of their cinematic sisters. In this story, the little old ladies rule.

"Desiccated" - The Mummy and other later films often depict the protagonist's love interest as the mummy's reincarnated sweetheart, but in this story I do away with the male characters and let the heroine and the Ancient Egyptian princess become the focal characters. Margot definitely has a connection to Princess Ahmesahura, but their encounter has more complicated consequences than a simple substitution. Margot is also something a movie buff, since the horrible kids she has to chaperone remind her of The Omen, and she recognizes the encased mummy as a familiar figure from old films.

"Hoodoo Man" - Classic horror fans will immediately recognize that Cleophas Legendre has appropriated his surname from Bela Lugosi's character in White Zombie, which also informs the way that the zombies themselves are handled. These are classic zombies, not the Romero brain-eaters. I really admire the short fiction of Alice Walker and Eudora Welty, and I hope their influence comes through, but this story is particularly inspired by Zora Neale Hurston's "Sweat." It's also about the blues, especially Nina Simone's fantastic rendition of "I Put a Spell on You."

"Mama Doll" - I wanted to include stories about different kinds of oppressed characters finding some poetic justice through supernatural events, and I really liked the idea of the golem as a monster that we don't see that often. Carlita is a young Hispanic girl thrown into a corrupt foster care system, but her own creativity and will to live make her a surprisingly strong character. My sister and I used to make doll people like this one when we were kids; once we even hid my sister inside one and put her on the porch, where she came to life and terrified trick-or-treaters reaching for the bowl of candy in her lap.

"This is Not a Life" - Forbidden Planet is one of my favorite science fiction movies because of the way it revises Shakespeare's The Tempest as a Freudian fable, and I play with some of those ideas here, too. Isolated on his island paradise, William Prosper has mastered science that certainly looks like magic; instead of a daughter he has his wife, Perdita, who gets her name from The Winter's Tale. There's some Heart of Darkness going on, as well, plus a shout-out to Jules Verne's 20,000 Leagues Under the Sea. I saw a Magritte exhibit in Montreal many years ago, and those trippy images seemed like the perfect complement to this story.

"Morning Comes After the Storm" - I used to teach Robert Browning's "Porphyria's Lover" all the time, and the ending always bothered me. Browning is intentionally ambiguous, but this story reveals what I like to imagine happening next. The dog recalls the beloved pet of Browning's wife, Elizabeth Barrett, who was already a famous poet when Browning started writing fan mail to her. You might say I'm recasting Browning's story according to the workings of Poe's universe. Hopefully that works.

"The Exorcism of Wendell Grove" - I love funny ghost stories like The Ghost Goes West (1935) and The Canterville Ghost (1944). Even Blackbeard's Ghost (1968) makes me laugh. This story is meant to be fun rather than scary, like riding The Haunted Mansion at Disney World, but it still pursues the theme of poetic justice. Frederica Island is inspired by St. Simons Island, in coastal South Georgia. I don't know what actual ghosts they have there, but the story includes a Southern belle, a slave woman, freaky poltergeist twins, gentleman duelists, a drunken frat brother, and a pirate.

Here's the link to the ebook in case you're one of those three people!
Posted by Jennifer Garlen at 1:15 PM