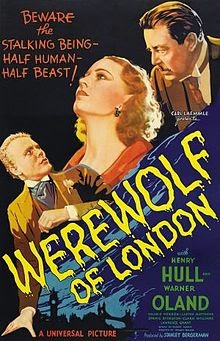 Although The Wolf Man (1941) is by far the best known of the Universal werewolf movies, director Stuart Walker’s Werewolf of London (1935) predates it by a good six years, making it one of the earliest examples of the genre. The 1935 picture lacks an iconic horror star like Chaney, Karloff, or Lugosi; instead, it relies on Henry Hull, an actor primarily relegated to supporting roles, as the afflicted protagonist who sprouts fur and fangs whenever the full moon rouses his inner animal. Of the Universal horrors of the 1930s, Werewolf of London is certainly a minor addition, but it does have particular charms for classic movie fans and those seriously interested in the history of werewolf films. Supporting performances by Valerie Hobson, Spring Byington, and a collection of character actresses make Werewolf of London worth watching, even if the picture’s comical old ladies prove more interesting than its titular monster.

Henry Hull plays botanist Dr. Wilfred Glendon, who travels to Tibet in search of a rare moon flower. There he is bitten by a werewolf, Dr. Yogami (Warner Oland), who later appears in London to ask Glendon for some of the flowers from his plant. The blooms are the only thing that can prevent both men from turning into murderous werewolves when the moon becomes full, but the short supply creates deadly conflict between them, even as both struggle to prevent themselves from killing more innocent victims. Glendon’s troubles are compounded by his growing estrangement from his wife, Lisa (Valerie Hobson), and the unwelcome attention of her former beau, Paul (Lester Matthews).

None of the men in the film is especially compelling. In The Wolf Man, Chaney’s protagonist appeals because we see him as a good man tragically robbed of his humanity, but Hull’s Glendon is more the obsessed scientist type, a character begging for doom to knock at his door. Hull lacks the screen presence of a true horror star; though not very handsome or charismatic, he does at least have a good face for the werewolf makeup. The monster’s look was designed by Jack Pierce, who had already worked on Dracula (1931), Frankenstein (1931), and The Mummy (1932) and would go on to provide the hairy facial treatment for The Wolf Man. Hull actually makes a more interesting werewolf than he does a human being, and we do get several transformation scenes showing off the special effects process. Warner Oland plays a sinister variant on the Charlie Chan character, but he never develops into a really satisfying villain or a tragic victim of his own circumstances. Lester Matthews plays Paul as a relentless interloper who steals the girl from his monstrous rival, which makes him hard to root for as any sort of hero.

The women fare better, especially Valerie Hobson as Glendon’s unhappy wife. Hobson’s elegant face registers the many shades of Lisa’s complicated feelings; while Paul was her first love, she is determined to be loyal to the man she married, even as he drifts away from her to grapple with his monstrous urges. Hobson was no stranger to this kind of role, having already played Dr. Frankenstein’s wife in The Bride of Frankenstein (1935) that same year. Very different from Hobson but perhaps even more memorable are the movie’s old ladies, a bevy of colorful characters led by Spring Byington as Aunt Ettie. Charlotte Granville, playing the wry Lady Forsythe, has some humorous exchanges with Byington, but the upper crust ladies are outdone by the more outrageously funny old gin swillers portrayed by Ethel Griffies and Zeffie Tilbury. They don’t really have anything to do with the werewolf plot, which might annoy some viewers, but those who appreciate Una O’Connor in The Invisible Man (1933) and The Bride of Frankenstein will adore them.

Stuart Walker also directed Henry Hull in a 1934 adaptation of Great Expectations, but Walker spent more of his career as a producer, particularly of the Bulldog Drummond series. You can see Hull in a more sympathetic light in Boys Town (1938) and Lifeboat (1944). The Swedish Warner Oland played mostly yellow face roles; in addition to Charlie Chan, he also starred in a series of Fu Manchu pictures. Look for Valerie Hobson in Great Expectations (1946), Blanche Fury (1948), and Kind Hearts and Coronets (1949). Spring Byington earned an Oscar nomination for Best Supporting Actress for You Can’t Take It with You (1938), while Ethel Griffies is best remembered today as the ornithologist, Mrs. Bundy, in The Birds (1963).
Posted by Jennifer Garlen at 3:23 PM