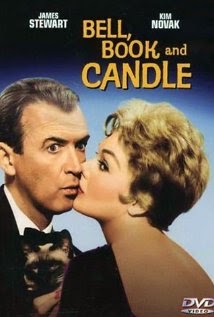 James Stewart and Kim Novak starred in Bell, Book and Candle (1958) the same year they made Vertigo (1958), and both films illustrate the hazards of becoming obsessed with someone you don't really know. Bell, Book and Candle plays this set-up as fodder for supernatural comedy rather than psychological suspense, but there's still an air of menace about the proceedings. The fun depends mostly on sly, offbeat performances from Jack Lemmon, Elsa Lanchester, Hermione Gingold, and Ernie Kovacs, with Stewart and Novak perfectly serious about their magical game of cat and mouse. The result is an odd film, engaging but troublesome, especially in its insistence on an ending that enforces conformity and outdated notions of gender-driven power.

Stewart plays middle-aged publisher Shep Henderson, who becomes entangled with his strange neighbors, the attractive Gil (Novak) and her mischievous aunt, Queenie (Elsa Lanchester). Despite their unusual habits, Shep never suspects that the women are actually witches, living in modern day New York and more or less hiding in plain sight. Shep's fiancee, Merle (Janice Rule), turns out to be Gil's old school nemesis, which inspires Gil to steal Shep for herself by using her magic, even though she insists that she doesn't really care about him. Gil also casts a spell to bring occult author Sidney Redlitch (Ernie Kovaks) to Shep's office, but his arrival complicates matters when he enlists the help of Gil's feckless brother, Nicky (Jack Lemmon), to write about the modern witches of New York.

There is plenty to like about this picture, especially the unconventional community of witches and warlocks, who even have their own night club and generally seem intent on having a good time. They're a bohemian crowd, weird but not really ambitious enough to play more than pranks. Nicky bangs the bongos and switches off street lights, while Aunt Queenie enjoys breaking into Shep's apartment and snooping around. Only Gil is serious and talented enough to do real harm; she terrifies Merle with a conjured thunderstorm and turns Shep's life upside down. Lanchester and Lemmon are delightful and perfectly cast, while Hermione Gingold revels in her matriarchal character, the powerful Bianca de Passe. She has her best scene when Shep comes to her for help in breaking Gil's love spell, in which she mixes a horrific potion and commands the poor victim to drink it. Rumpled Ernie Kovaks also fits in like a natural; the existence of witches in New York is great news for Redlitch and his next book, and his enthusiasm for the community contrasts Shep's growing horror.

The breakdown of the fun happens in the third act, when it becomes clear that Gil's power is deemed unnatural and antithetical to her femininity. Having it all is not an option; she can be a witch and never love, or she can lose her power to become the kind of girl Shep might want to marry. This is similar to the premise set forth in the earlier I Married a Witch (1942), in which Veronica Lake's supernatural heroine becomes a mortal for the love of Fredric March, but Bell, Book and Candle is much more heavy-handed about its disapproval of the powerful, unconventional woman. When we first meet Gil, she wears black, goes barefoot, and sells bizarre tribal masks in her shop, but in order to win Shep for real she has to give up all of those things and conform to his rather narrow expectations. Is Shep really worth it? Would it be so terrible to end up like Aunt Queenie and Madame de Passe? Given the glaring age difference between Stewart and Novak, many modern women might well decide that Gil would have been better off keeping her magic and her cat instead of surrendering to middle-class values for a man old enough to be her father. One suspects that Nicky and the witches will be having a good time long after Gil has gotten tired of seashells, shoes, and a kitchen full of dirty dishes.

Bell, Book and Candle earned two Oscar nominations, for art direction and costume design. Director Richard Quine also worked with Jack Lemmon in It Happened to Jane (1959) and How to Murder Your Wife (1965), and Lemmon and Novak both appear in his 1962 film, The Notorious Landlady. For more of Kim Novak, see Picnic (1955), The Man with the Golden Arm (1955), and Kiss Me, Stupid (1964). Jimmy Stewart's other pictures from the late 1950s include Night Passage (1957) and Anatomy of a Murder (1959). Don't miss Hermione Gingold in The Music Man (1962), and be sure to appreciate Elsa Lanchester's Oscar-nominated performance in Witness for the Prosecution (1957), in which she antagonizes her real-life husband, Charles Laughton.
Posted by Jennifer Garlen at 12:04 PM