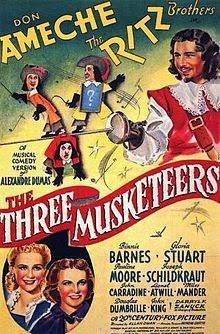 Among adaptations of Alexandre Dumas' classic novel, this 1939 version is certainly a lightweight, and not nearly as elaborate an affair as the 1948 MGM production starring Gene Kelly. The Fox incarnation, directed by Allan Dwan, revises the original tale as a musical comedy vehicle for The Ritz Brothers, who had a brief film career in the late 1930s and early 40s. They never really took off, and here they prove more of a distraction than a feature. If you like Don Ameche, however, The Three Musketeers has its charms, since the movie provides the amiable star with the kind of swashbuckling role usually reserved for his Fox peer Tyrone Power. It also features worthwhile performances from Gloria Stuart, Binnie Barnes, and Lionel Atwill, as well as brief appearances by John Carradine and Douglass Dumbrille.

Ameche plays D'Artagnan, who arrives in Paris to become a Musketeer, only to pick quarrels with Athos, Aramis, and Porthos on his very first day. The heroic trio, however, succumb to a drinking contest with The Ritz Brothers, who assume their outfits and identities before D'Artagnan arrives to fight his duels with them. Along with D'Artagnan, the fake Musketeers are then swept along into a dangerous political plot involving Queen Anne (Gloria Stuart) and her lady-in-waiting, Constance (Pauline Moore). Their adventures bring them into direct conflict with the devious Milady De Winter (Binnie Barnes) and the scheming Cardinal Richelieu (Miles Mander) as they try to retrieve the queen's brooch before its absence sparks an international scandal and war.

The Ritz Brothers get some modest laughs, but the movie shows why they never really took off as screen stars. They are neither as violent as the Stooges nor as cerebral as The Marx Brothers. The "Chicken Soup" song that introduces them sums up their comedy style; there's a lot of winking and silliness but not much thought to the act. Kids might find them sufficiently entertaining, but most adults will wonder how they manage to merit top billing with Ameche. The movie also falters by wasting Douglass Dumbrille and John Carradine, both terrific character actors, in very small roles; Dumbrille barely has a single scene, and Carradine disappears after just a few minutes. Instead we get lots of shenanigans with The Ritz Brothers as they stumble through one mishap after another, never really varying their gags or developing their characters as anything more than props.

Ameche is the real attraction; he looks quite dashing in his period hair and costumes, and his infectious charm goes a long way to make up for the movie's failings. His D'Artagnan is a gleeful combatant and an energetic romancer, and he really seems to be having a good time waving his sword and playing the swashbuckling hero. Even if the songs are not that memorable, Ameche sings them with zest, especially the "Voila" number. His leading ladies also help to move the picture along. Pauline Moore makes a lovely Constance, and Gloria Stuart is beautifully regal as the imperiled Anne. Binnie Barnes doesn't vamp as much as some Milady actresses, and she has to endure a really awful search scene with the Ritz Brothers, but she sells the character's smiling menace to great effect. Sadly, Milady's worst crimes - and best scenes - are cut to keep the picture firmly in comedy territory. Lionel Atwill, another great character actor and a reliable heavy, gets a heftier part than Carradine and Dumbrille as De Rochefort, one of the schemers working against the queen.