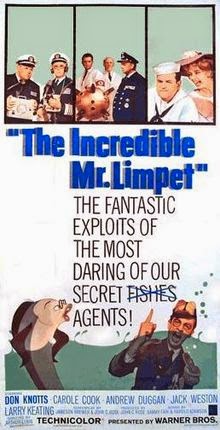 Don Knotts stars in The Incredible Mr. Limpet (1964), one of the weirdest war comedies ever made, in which a nearsighted amateur ichthyologist transforms into a fish and then becomes an unlikely hero during World War II. This family-friendly picture combines animation and live action for its strange fish tale, and it possesses an odd charm that still works on viewers of all ages, thanks to Knotts’ sweetly funny performance and plenty of lively action that keeps the story in motion. Jack Weston, Carole Cook, and Andrew Duggan also make memorable appearances, but the movie really belongs to Knotts and the colorful undersea world where he finds friendship, adventure, and love.

Knotts plays Henry Limpet, a timid, bookish fellow whose wish to be a fish comes true when he falls off a pier at Coney Island. While his wife, Bessie (Carole Cook), and overbearing pal, George (Jack Weston), give him up as drowned, Henry embarks on a new life underwater, where he makes friends with a hermit crab (Paul Frees) and attracts the admiration of the lovely Ladyfish (Elizabeth MacRae). Henry also finds purpose when he realizes that his unique situation allows him to help the US Navy hunt down Nazi U-boats in the Atlantic.

Most people immediately think of Knotts as Barney Fife, and his popularity on The Andy Griffith Show more or less defined his career, but as Henry Limpet Knotts gets to play a gentler, less buffoonish character. There are distinct shades of a Jimmy Stewart type in Knott’s Henry; he might be obsessed with fish, but he’s a sweet guy, very bright, and really just waiting for a chance to prove himself. Henry longs to serve his country in spite of his 4F status, and his magical transformation gives him a chance to become both a hero and a figure of romance. He first appears as a puny, undersized human, but he makes for a strapping and extraordinary fish. Knotts even gets to sing the movie’s signature song, “I Wish I Were a Fish,” and though he’s no crooner it further shows that the actor had more range than many Barney Fife fans might expect.

The supporting actors in the live action scenes mostly react to Knotts, even when he’s playing the milquetoast human version of Henry. As George Stickel, Jack Weston is overbearing when Henry is a man but amusingly in awe of his pal as a fish, and he serves as the link between Henry’s two worlds. Carole Cook seems like a terrible harridan of a wife to Henry until she thinks he has drowned, and then she reveals a surprising tenderness toward him that makes us reassess our sense of her character. Andrew Duggan plays Harlock with a mix of befuddlement and practical acceptance of whatever gets the job done, but even in the framing sequences Harlock and Stickel look like they’d rather forget all about incidents they still can’t really believe. Elizabeth MacRae’s Ladyfish might be the least interesting character in the whole picture, with her sexy voice and vacuous personality, but Paul Frees invests Crusty the hermit crab with a feisty loyalty that makes him a highlight of the story.

Arthur Lubin, who directed The Incredible Mr. Limpet, also made Buck Privates (1941), Francis the Talking Mule (1950), and Rhubarb (1951), as well as a whole series of Francis sequels. For more of Don Knotts’ film career, see No Time for Sergeants (1958), The Ghost and Mr. Chicken (1966), and The Apple Dumpling Gang (1975). Look for Jack Weston in Wait Until Dark (1967) and The Thomas Crown Affair (1968). Veteran voice actor Paul Frees earned more than 300 screen credits for his film and television work, and you might recognize him as the voice of Barney Bear, Wally Walrus, Boris Badenov, Snuffy Smith, Charlie Beary, Ludwig Von Drake, and a host of other animated characters.
Posted by Jennifer Garlen at 11:23 AM