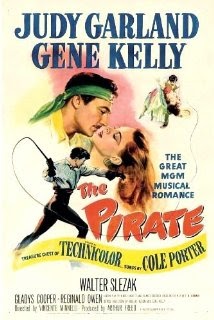 In the same year that she starred with Fred Astaire in Easter Parade (1948), Judy Garland partnered with Hollywood’s other reigning hoofer, Gene Kelly, in the Caribbean musical romance, The Pirate (1948). Garland and Kelly had already starred together in For Me and My Gal (1942), and they make a very lively pair in this odd, boisterous romp, which also benefits from Cole Porter’s songs and Vincente Minnelli’s direction. With its tropical setting and heated dance numbers, The Pirate pulses with sexual energy, but it moderates its plot about a young girl’s bedroom fantasies of kidnap and ravishment with liberal doses of comedy. Supporting appearances from Walter Slezak, Gladys Cooper, and the fabulous Nicholas Brothers also make this picture worthwhile for musical and comedy fans.

Garland stars as Manuela, whose arranged marriage to the much older Don Pedro (Walter Slezak) threatens to extinguish her hope for a life of romance and adventure. Her beauty attracts the admiration of Serafin (Gene Kelly), a traveling actor who pursues Manuela to her hometown and disrupts the wedding by claiming to be the infamous pirate, Mack the Black Macoco. Serafin’s ruse backfires, however, when the real Macoco connives to have the actor executed for the outlaw’s crimes.

The plot of the story is surprisingly lusty, with Manuela as both desired object and desiring subject. She yearns for the rough embrace of Macoco the pirate, primarily because she is bored with her conventional, sheltered upbringing and has no idea what an encounter with a real pirate would be like. Don Pedro, fat, rich, and determined to live a quiet life, represents the very opposite of everything that Manuela thinks she wants, but Serafin doesn’t live up to her ideal, either, since he’s merely a rakish entertainer. Manuela gets to live her fantasy, even if it’s just pretend, when Serafin poses as Macoco and demands that Manuela be delivered to him as a sacrifice to save the town. This is kinky stuff for 1948 and sweet-faced Judy Garland, but the movie treats the subject with such ironic humor that it gets passed off as a harmless lark. Still, it’s hard to imagine the production heaving with the same urgency without Gene Kelly in those delightfully tight pants, even if his wig looks a bit silly.

Several of the musical numbers contribute to the heady sexual atmosphere. Louis B. Mayer might have destroyed the alarmingly sexy “Voodoo” number that was meant to be in the picture, but the songs that remain give the audience plenty of heat. Kelly’s “Nina” number has him trying to make out with every girl in port, and the pirate ballet sequence shows off both his dancing ability and his naked legs. Garland waxes rhapsodically about “Mack the Black” and literally lets her hair down to fantasize about being carried off by the buccaneer. Other songs moderate the prevailing mood of the picture with comedy or more traditional romance; the best of the lot is the first performance of “Be a Clown,” which features Kelly with the incredibly talented Nicholas Brothers.

The Pirate succeeds at balancing sensuality with comedy thanks to its cast. Kelly is obviously having a ball as the waggish Serafin; he plays at being a swashbuckler like Douglas Fairbanks and hams up his theatrical bits like John Barrymore. Garland, already fragile and edging toward the end of her MGM career, still looks lovely and has the strength to hold her own against Kelly. The scene in which she throws a roomful of breakable objects at him is quite a spectacle. Gladys Cooper is both maternal and mercenary as Manuela’s Aunt Inez, while Walter Slezak has some very good scenes as the dour Don Pedro. George Zucco makes a brief but memorable appearance as the Viceroy who wants to hang Macoco, and Reginald Owen also turns up in a small supporting role.