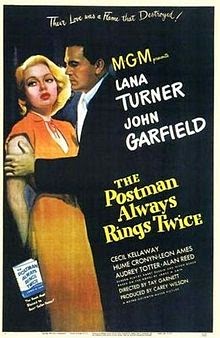 Adapted from the novel by James M. Cain, The Postman Always Rings Twice (1946) delivers all of the classic noir conventions, with a special emphasis on the ironic workings of fate. Tay Garnett directs this MGM contribution to film noir, which features an iconic performance from Lana Turner as the resident femme fatale, along with John Garfield and Cecil Kellaway as the doomed flies caught in her attractive web. Leon Ames and Hume Cronyn also make memorable appearances as a pair of lawyers who care more about competition than actual justice. Modern critical opinion of Postman goes both ways; David Thomson applauds it, while David N. Meyer derides it, but it's still required viewing for any serious noir fan.

Garfield is drifter Frank Chambers, who takes a "Man Wanted" position at a roadside station because of the owner's seductive wife, Cora (Lana Turner). Frank and Cora begin an affair, but Nick (Cecil Kellaway) seems like an impossible obstacle to their happiness, and they start to imagine their lives without him standing in the way. When Nick announces his plan to sell the station and take Cora away to Canada, the lovers rush into desperate action, but the district attorney (Leon Ames) has his eye on the murderous pair, and their plot becomes far more complicated than they intended.

Each of the three main characters is a loser in his or her own way, but Postman presents them in shades of gray that slowly slip toward black. Kellaway's Nick seems jovial and kindly at first, until we realize how tight-fisted and dictatorial he is, especially where Cora is concerned. When Frank and Cora first think of killing him, we feel bad for the old man, but his abrupt decision to force Cora to Canada to play nurse for his invalid sister goes a long way toward justifying the second attempt. Cora just wants to make something of the diner. She isn't afraid of hard work, and at first she resists Frank's advances. "You won't find anything cheap around here," she tells him. As her spotless white outfits shift to black, however, she reveals a dangerous jealousy and even mental instability. What kind of mother would such a woman have made? We get the feeling that Junior might have grown up to be the Norman Bates of the Twin Oaks establishment, had fate not conveniently stepped in. Frank himself is the first to blame; he only takes the job to chase Cora, and he doesn't let up until it finally dawns on him that he might be in over his head. He does try, at least, to walk out, but by then he has already set the dominoes in motion.

Oddly enough, the most despicable people in the film are the lawyers, played with predatory cunning by Leon Ames and Hume Cronyn. Ames' district attorney pretends to be on the side of justice, but he seems perfectly content to let Frank and Cora commit murder so that he can prosecute them, when he actually has plenty of opportunity to stop the murder from happening in the first place. His moral posturing at the movie's end reeks of irony, given his cavalier bet with the opposition about the earlier trial's outcome and his willingness to make plea deals. Cronyn's Arthur Keats lacks even the veneer of morality; he's a sharper, as crooked as they come, and ready to do everything but commit murder himself to control the verdict in Cora's trial. Cronyn is so gloriously sleazy that he more or less steals the movie every time he shows up, and that's quite a feat when Lana Turner's ample charms are on display.

Audrey Totter, another notable femme fatale, adds an extra touch of irony as the girl Frank runs off with when he gets mad at Cora; he clearly has a thing for dangerous curves. Take note of Fred Flintstone voice actor Alan Reed as the lumbering crook, Kennedy. For more from Tay Garnett, try China Seas (1935), The Cross of Lorraine (1943), and The Valley of Decision (1945). Cain's novel was also adapted in Italy as Ossessione (1943), which makes a provocative double feature with Postman. See John Garfield in They Made Me a Criminal (1939), Tortilla Flat (1942), and Gentleman's Agreement (1947). Lana Turner turns heads in Love Finds Andy Hardy (1938), Dr. Jekyll and Mr. Hyde (1941), and The Three Musketeers (1948). Don't miss Cecil Kellaway in Harvey (1950) and Hush... Hush, Sweet Charlotte (1964), and be sure to appreciate Hume Cronyn in Lifeboat (1944). Leon Ames is probably best remembered today as the Smith family patriarch in Meet Me in St. Louis (1944), but you'll also find him in Lady in the Lake (1947) and Little Women (1949).
Posted by Jennifer Garlen at 8:30 PM