A Tribute to Lauren Bacall 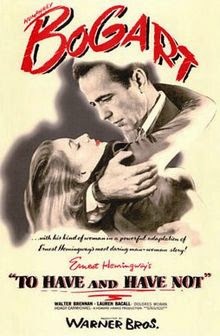 I'm not tough. In fact, I'm really kind of a powder puff, the type of person who apologizes at the drop of a hat and can be made to feel bad for months with just a sharp word or a reproving look. Maybe that's why I have always loved the tough dames of classic Hollywood; they exude strength and a "Hell if I care" attitude that I can only dream of having. Bette Davis, Barbara Stanwyck, Katharine Hepburn, Joan Crawford, and Lauren Bacall could all cut a man dead with one hard look. Today we lost Bacall, the last of the great noir dames, and the world seems a sadder place without her.

What can you say about an actress who was known as "The Look"? Whatever IT was, she had it in spades. From her very first picture, To Have and Have Not (1944), she was great, feeding Bogart seductive lines and that comeback stare. No wonder he fell hard. Every man on earth must have learned to whistle in 1944, even if he wasn't named Steve (which, by the way, Bogart's character wasn't). Bacall was launched into noir legend and the arms of Humphrey Bogart at the tender age of 19, but you would never have guessed how young she was from the way she carried herself on screen. 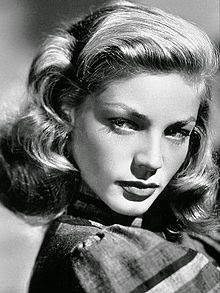 She went on acting for the rest of her life. She did voice work, earned an Oscar nomination, went forward, and aged well. She survived the loss of Bogart in 1957, remarried, divorced, raised three children, and wrote multiple memoirs of her life in Hollywood. She was tough, yes, but elegant, too, and into her 80s she was more beautiful than most people can ever hope to be.

Tonight the classic movie fan community - and the world at large - join her family in mourning the loss of Lauren Bacall, but I'm so grateful that she was with us for such a long time, to show us not only how to be tough and 20, but how to be great at every age.

Thanks for everything, Betty Joan Perske. We'll never forget you.
Posted by Jennifer Garlen at 9:09 PM