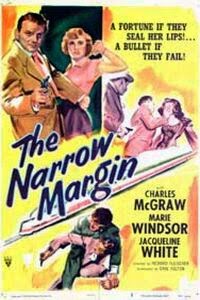 It might not be as famous as the noir classics that usually make the top ten lists, but The Narrow Margin (1952) is definitely a picture that every noir fan ought to get around to, and the sooner the better. Richard Fleischer’s tight, smart thriller packs a cross-country train trip with unexpected twists, making great use of the confined spaces and close quarters that its setting entails. This RKO production also features knockout performances, particularly from Charles McGraw and Marie Windsor, with Jacqueline White providing a refined contrast to Windsor’s dangerous dame. Those who enjoy train movies will love this film’s claustrophobic, high-speed atmosphere, and noir devotees will find enough pointed lines and sudden reversals to satisfy even the most devious imagination.

Charles McGraw stars as Walter Brown, a tough police detective saddled with the job of transporting a mobster’s widow across country so that she can testify in court. Mrs. Neal (Marie Windsor) turns out to be exactly the kind of cheap, selfish tramp Brown expects, but he and his partner, Forbes (Don Beddoe), have to protect her at any cost. Of course the mob wants her silenced, and their attempts to get to the witness only intensify once they board a train from Chicago to Los Angeles. Brown’s efforts to keep Mrs. Neal alive become even more complicated when he meets the attractive Ann Sinclair (Jacqueline White) and accidentally leads the killers to think that she is their target.

The Narrow Margin plays with our expectations and those of its own characters, especially Brown. The jaded cop is sure that he knows all about Mrs. Neal before he even meets her. “What kind of dame would marry a hood?” he asks, and Marie Windsor’s flashy viper matches his preconceived image perfectly. As a result, he doesn’t feel obligated to be nice to her; he repeatedly tells her to shut up and handles her like a parcel of dirty laundry. He gets as good as he gives, too. “You make me sick to my stomach,” he tells her. “Well,” she snaps back, “use your own sink.” Brown only softens when he meets Ann, a classy, polite blonde who is Mrs. Neal’s opposite in every way. The trouble is, Brown knows a lot less than he thinks about what is really going on, and his actions put both women in danger.

The train setting ratchets up the tension because the killers and their targets come into such close contact; nobody can hide except in plain sight. Paul Maxey is an especially imposing presence in this environment; his character, Sam Jennings, uses his girth as an effective weapon in the train’s cramped corridors. “Nobody loves a fat man,” he jokes, but he knows exactly how to throw his weight around to achieve his aim. Gordon Gebert’s hyper Tommy Sinclair also has an exaggerated effect in the tight spaces; his boyish noise draws unwanted attention to Brown every time the two meet. Brown struggles to keep a low profile in spite of these and other human obstacles to his mission, but he has to play a weirdly blatant cat and mouse game with the killers. His only advantage is that the assassins don’t know what Mrs. Neal looks like, but it’s just a matter of time before hunters and prey occupy the same fatal space.