Happy Halloween! It's time for spooks, ghouls, and other things that go bump in the night, which means now is the perfect time to curl up with some classic horror movies. It's the season of Vincent Price, Christopher Lee, Peter Lorre, Lon Chaney, Boris Karloff, and other iconic horror stars, all of them still delightfully creepy even in films made more than fifty years ago. Here are ten of my favorite Halloween treats; as you can tell, I like my classic horror both classy and campy, although I'm not generally a big fan of gore. 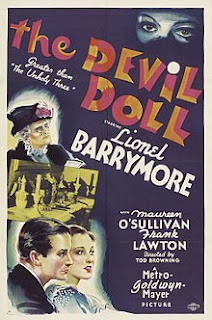 1) THE DEVIL-DOLL (1936) - Tod Browning directs Lionel Barrymore in drag! The dolls, as creepy as they are, still aren't as scary as Rafaela Ottiano, who plays the wife of the scientist who creates them.

2) THE WOLF MAN (1941) - My favorite Universal monster makes his screen debut, with Lon Chaney, Jr., Claude Rains, Bela Lugosi, and scene-stealer Maria Ouspenskaya. "Even a man who is pure of heart, and says his prayers by night, may become a wolf when the wolfbane blooms, and the autumn moon shines bright..."

4) ARSENIC AND OLD LACE (1944) - No, it's not really a horror film, but it has such a good time playing with the conventions of the genre, from Peter Lorre's Dr. Einstein to Raymond Massey's Boris Karloff lookalike. There's something inherently absurd about homicidal old ladies, but we love the Brewster sisters all the more for their deadly idea of charity work! Besides, the story takes place on Halloween, which makes it the perfect movie to watch on October 31. 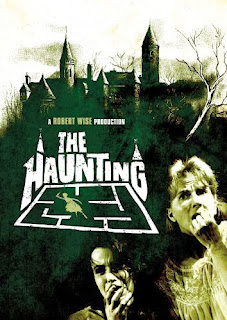 5) BEDLAM (1946) - I adore Val Lewton, so he gets a second film in my list. This one stars Boris Karloff and Anna Lee and takes place largely in the notorious 18th-century London madhouse. Gothic, literate, and full of great shocks, BEDLAM is not as well-known as CAT PEOPLE but definitely deserves more attention from classic horror fans.

6) EYES WITHOUT A FACE (1960) - Georges Franju's haunting tale of murder, mutilation, and madness is one of the scariest classic horror films I have ever seen, mostly because its images and themes stay with the viewer long after the movie ends. If you're looking for serious chills for Halloween, this is the picture for you.

7) THE HAUNTING (1963) - For serious scares I love this iconic haunted house chiller, which skillfully adapts the novel by Shirley Jackson and really puts the screws to the audience as well as the characters. Julie Harris and Claire Bloom fall apart magnificently when the house cranks up the horror, and that breathing door scene is something you'll never forget. 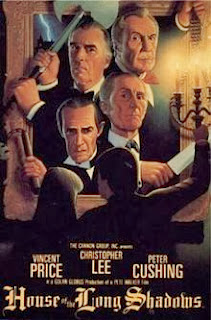 8) THE COMEDY OF TERRORS (1963) - This black comedy brings so many of my favorite horror players into one place. We have Jacques Tourneur directing and Richard Matheson writing, with Vincent Price, Peter Lorre, Boris Karloff, and Basil Rathbone playing the leads. You'll die laughing!

9) DRACULA A.D. 1972 (1972) - Disco Dracula! This is one of the trippier Hammer horrors to star both Christopher Lee and Peter Cushing in their vampire and Van Helsing roles, but it's just so much fun, including the house party performance of "Alligator Man."

10) HOUSE OF THE LONG SHADOWS (1983) - It's silly and more like a thrill ride than a straight horror story, but I can't resist this movie's dizzying array of classic horror stars. Who can resist Vincent Price, Christopher Lee, John Carradine, and Peter Cushing all together?

What are your favorite classic horror movies for Halloween?
Posted by Jennifer Garlen at 11:18 AM