Classic Films in Focus: THE UNINVITED (1944) 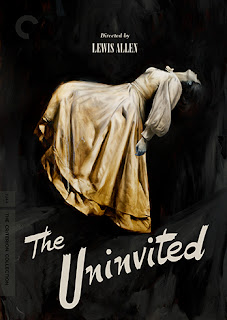 The Uninvited (1944) is an old-fashioned ghost story with deep roots in the Gothic tradition. Adapted from a 1941 novel by Dorothy Macardle, the story borrows major themes and motifs from Rebecca (1940), just as Daphne du Maurier’s novel had borrowed from Jane Eyre. In all three tales, romance mingles with mystery and horror generated by dark family secrets, but in The Uninvited the idea of the heroine being haunted by other women becomes quite literal. With its seance scenes, ghostly moans, and strange apparitions, The Uninvited offers abundant otherworldly thrills for Gothic romance fans, who will find plenty to love in this atmospheric tale of love and hatred from beyond the grave.

Ray Milland and Ruth Hussey star as siblings Roderick and Pamela Fitzgerald, who buy an old estate on the rural English coast only to discover that its cheap price stems from its reputation as a haunted house. The previous owner, Commander Beech (Donald Crisp), seems glad to be rid of the place but stubbornly refuses to see the new residents as friends, while his granddaughter, Stella (Gail Russell), welcomes the society of the Fitzgeralds, despite her grandfather’s orders to avoid them. As Roderick and Pamela confront the restless dead that roam their home, they begin to uncover the mystery of Stella’s past, but it turns out that the ghosts are not the only ones who wish deadly harm to the innocent girl.

The Fitzgerald siblings function as detectives and drive the narrative forward with their supernatural sleuthing, but Gail Russell’s Stella is the central heroine, the lynchpin on whom all these manifestations and secrets depend. The young actress’ fragile, melancholy beauty perfectly suits the ambience of the story and her character’s situation. Only twenty years old and accustomed to being controlled by her grandfather’s relentless will, Stella blooms when Roderick takes a romantic interest in her. The leap into sexual maturation inspires her to disobey the Commander, a dangerous but necessary step because it brings her into contact with the ghosts of Windward House, who must be laid to rest before Stella and Roderick can be united. Sexual subtext dominates much of the narrative, especially when another character reveals a passionate obsession with one of the dead women from Stella’s past.

Most of the scenes unfold with an emphasis on mystery rather than horror, with Roderick and Pamela interviewing everyone who might be able to shed some light on the shadowy past of Windward. The ghostly moments are reserved, like a rich treat, for periodic enjoyment; we get one thrilling scene of disembodied weeping or terrified pets and then have to wait a while before the next one presents itself. Each new manifestation increases the Fitzgeralds’ sense of urgency and also reveals the danger that the house presents to Stella. The film wisely limits its use of the floating apparition, relying instead on more subtle effects or the characters’ descriptions of their experiences within the house. Rooms turn cold, perfume fills the air, and an unseen hand flips the pages of an open book. These moments inspire the audience with delicious, spine-tingling chills, especially when ghostly moaning fills the house and a seance calls forth the spirits of the dead.

Take a moment to appreciate the supporting performances of Alan Napier as Dr. Scott and Cornelia Otis Skinner as Miss Holloway. Lewis Allen, who directed The Uninvited, also directed The Unseen (1945), Appointment with Danger (1951), and A Bullet for Joey (1955). See more of Ray Milland in The Lost Weekend (1945) and Dial M for Murder (1954). Ruth Hussey is best remembered for her supporting role in The Philadelphia Story (1940), while Donald Crisp plays more paternal types in How Green Was My Valley (1941), Lassie Come Home (1943), and National Velvet (1944). Sad-eyed Gail Russell also stars in Angel and the Badman (1947), Wake of the Red Witch (1948), and Seven Men from Now (1956). If ghostly Gothic romance thrills your heart, try Dragonwyck (1946) as a double feature with The Uninvited.

The Criterion Collection released newly restored Blu-Ray and DVD versions of The Uninvited on October 22, 2013. Special features include a visual essay, a trailer, two radio adaptations, and a booklet with an essay from classic movie blogger, Farran Smith Nehme.

Read more about Gothic romance:
THE HOUSEKEEPER IN THE GOTHIC FILM TRADITION
REBECCA (1940)
DRAGONWYCK (1946)
THE INNOCENTS (1961)

Posted by Jennifer Garlen at 2:14 PM