Hammer Halloween Blogathon: DRACULA HAS RISEN FROM THE GRAVE (1968)

This post is part of the Hammer Halloween Blogathon hosted by the Classic Film and TV Cafe. Go to www.classicfilmtvcafe.com to view the complete blogathon schedule. 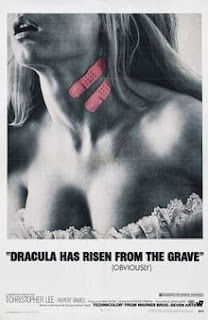 We’ve gotten pretty far afield from Bram Stoker’s original Dracula by the point at which Hammer adds Dracula Has Risen from the Grave (1968) to its long line of vampiric sequels, although not perhaps as far as we’ll get with Dracula A.D. 1972 (1972) and The Legend of the 7 Golden Vampires (1974). In the 1968 picture, released a decade after Horror of Dracula, Christopher Lee returns as the iconic count, although without Peter Cushing as his perpetual nemesis; this time we have priests instead of occultist academics as humanity’s defenders, played by Rupert Davies and Ewan Hooper, as well as a handsome young skeptic whose philosophical views get quite a rude check by the appearance of the bloodsucking undead. Neither the greatest nor the least of the Hammer Dracula films, Dracula Has Risen from the Grave is worth watching primarily for the ways in which it employs the studio’s favorite motifs while shifting the burden of the narrative arc to a character who is neither the monster nor his most visible opponent.

Lee’s immortal count, having been vanquished some years earlier, returns to prey upon the living when a fearful priest (Ewan Hooper) accidentally discovers him and supplies him with blood. A righteous Monsignor (Rupert Davies) has blocked Dracula’s access to his castle with prayer and a large cross, which enrages the count and inspires him to track down the high-ranking cleric in order to avenge himself. Luckily for Dracula, the Monsignor has a beautiful niece (Veronica Carlson) for the vampire to seduce, and her lover’s attempts to save her are hampered by his own disbelief in God.

In many ways, Dracula Has Risen from the Grave merely shuffles the various conventions established by the earlier films and Stoker’s original novel. We have two central female victims, one (Barbara Ewing) associated with sexual liberty and the other (Veronica Carlson) so identified with virginal innocence that she cuddles a doll in bed. Unlike Stoker’s Mina, neither has any real agency as a character, although like most Hammer heroines they do boast impressive decolletage. Monsignor Ernest stands in for Van Helsing as the believer and elder human champion, while Paul (Barry Andrews) plays the Harker role as acolyte and romantic partner of the threatened good woman. Paul’s theological doubts do add a touch of modernity to his character, but, while there might indeed be atheists in foxholes, there certainly aren’t going to be any in the lair of the damned undead, especially when crosses have such an obvious effect.

That leaves the nameless priest played by Ewan Hooper as the Renfield character, the helpless and repugnant slave to evil who commits unspeakable acts in his master’s name. Hooper’s priest, however, is really the protagonist of the film, if you pay close attention to the action. The priest’s weakness begins when he discovers one of Dracula’s victims within his own church. Because of his inability to cleanse the church, the community loses faith. Because of his fear, he fails to accompany the Monsignor to the castle and thus accidentally stumbles upon the vampire and awakens him. Too weak-willed to fight, the priest promptly succumbs to Dracula’s control, but we see in every scene that he loathes himself and hates the terrible acts that he commits. He never loves and desires the vampire, as Renfield and the many female victims do, for he recognizes evil even when he cannot resist it. Ultimately, Dracula’s destruction depends on the priest, not on the Monsignor or Paul, which makes the priest the most dynamic and psychologically complex character in the entire film. His namelessness and relatively few lines might suggest that the priest is merely a secondary character, but they also give him the air of an everyman, and Ewan Hooper actually gives a wrenching performance in the many close-ups that show his horror at being the instrument of such relentless evil. Much more than Paul or the women, the priest suffers and struggles, rendering the film’s climactic moment both triumphant and tragic, but utterly his, even if the camera cuts away at the end to focus on the more conventional couple.

Every Hammer fan knows where to find more of Christopher Lee, but newcomers to the horror canon should see him in The Curse of Frankenstein (1957), Horror of Dracula (1958), and The Mummy (1959). Veronica Carlson also appears in Frankenstein Must Be Destroyed (1969) and The Horror of Frankenstein (1970). See more of Rupert Davies in The Spy Who Came in from the Cold (1965), Witchfinder General (1968), and The Oblong Box (1969). Ewan Hooper is a Shakespearean stage actor who turns up in films like How I Won the War (1967) and Kinky Boots (2005), but he has done quite a bit of British television, as well. Director Freddie Francis worked as a very successful cinematographer and also directed quite a few horror films; he won Oscars for his cinematography on Sons and Lovers (1960) and Glory (1989), but he also directed Trog (1970) and Tales from the Crypt (1972).