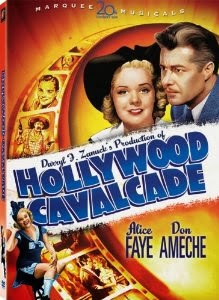 Fox’s Technicolor Tinseltown retrospective is by no means one of the most significant pictures to come out in 1939, but Hollywood Cavalcade has its charms as a sentimental tribute to the silent film era. Like the later - and much better - MGM musical, Singin’ in the Rain (1952), this story follows the changing fortunes of silent movie stars as the sound age arrives, with Alice Faye and Don Ameche as the leads in a cast that also includes some real veterans of the earlier era. Silent movie fans will find Hollywood Cavalcade worthwhile for its cameos and silent segments, even if its vision of cinema history is both romanticized and compressed, while Fox devotees will be glad to see strong performances from Faye, Ameche, and the very likable J. Edward Bromberg.

Don Ameche plays rising filmmaker Mike Connors, who signs Broadway actress Molly Adair (Alice Faye) and stakes his career on making her a star. Once they arrive in the infant Hollywood, still awash in orange groves, Mike and Molly start making pictures together, and Molly soon becomes a huge success. Molly pines for Mike’s romantic attention, but his single-minded obsession with the movies leads her to marry her handsome leading man, Nicky (Alan Curtis), which provokes a rift with the outraged Mike. Even Mike’s long-suffering friend and backer, Dave Spingold (J. Edward Bromberg), eventually walks out on the difficult and self-destructive director, but Molly, Nicky, and Dave never stop hoping for reconciliation and a chance to help Mike get his career back on track.

Oddly enough, Alice Faye never sings in this picture, and although the silent film sequences contain a lot of slapstick the central narrative is really a drama that focuses on the collateral damage caused by Mike’s intense dedication to his art. Ameche therefore carries most of the story’s punch, and he’s very good, especially as Mike spirals downward after Molly and Nicky marry. We understand, of course, that Mike has his chance with Molly and ignores it, but to Mike her marriage seems like an unforgivable betrayal, and it becomes a catalyst for the rise of his darker side. Mike’s movie-making combines the efforts of Mack Sennett, D.W. Griffith, Cecil B. DeMille, and other early innovators, and we see him run through the major styles defined by the silent directors in the inevitable march toward sound.

Alice Faye takes most of the comedy work in stride, getting pies in the face from Buster Keaton and being chased around by the Keystone Cops. Some of her silent film segments run a bit long, but they’re sincere homages to the earlier age, and it’s nice to see some of the old stars reliving their glory days, especially Al Jolson in the climactic recreation of The Jazz Singer (1927). Mack Sennett plays himself, as do Ben Turpin, Chester Conklin, and Lee Duncan, although Rin-Tin-Tin Jr. stands in for the original Rin-Tin-Tin. In the regular supporting cast, handsome Alan Curtis makes an attractive second choice as Molly’s love interest but has little to do, while J. Edward Bromberg brings a lot of heart to his loyal sidekick character. Modern viewers will probably find Willie Fung an irritating stereotype, but Donald Meek has a good small role as the studio head who first clashes with Mike.

Although Irving Cummings is the credited director for Hollywood Cavalcade, both Buster Keaton and Malcolm St. Clair made contributions to the film. Cummings, a silent film veteran himself, also made Curly Top (1935), Lillian Russell (1940), and Down Argentine Way (1940). For more Hollywood commentaries on motion picture history, try Footlight Parade (1933), Sunset Boulevard (1950), or The Artist (2011). Alice Faye and Don Ameche also star together in In Old Chicago (1937), Alexander’s Ragtime Band (1938), and That Night in Rio (1941). Catch J. Edward Bromberg in Strange Cargo (1940), The Mark of Zorro (1940), and Son of Dracula (1943).

Hollywood Cavalcade is included in the Alice Faye Collection Volume 2, and the DVD includes some several good bonus features, including a featurette about the film.
Posted by Jennifer Garlen at 1:29 PM