Our family's fall break trip to DC didn't work out, thanks to the government shutdown, but I did manage to visit Arlington National Cemetery before we defected to Colonial Williamsburg for the rest of the week. Here's a photo of the headstone that marks the resting place of World War II hero and classic Hollywood star Audie Murphy. 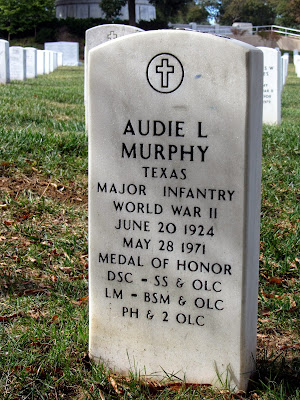 Famous as the Army's most decorated soldier during the war, Murphy became a leading man by playing himself in To Hell and Back (1955), which was adapted from his own written account of his experiences. He also starred in Westerns like Destry (1954), No Name on the Bullet (1959), and The Unforgiven (1960). Tragically, Murphy died in a plane crash in 1971 when he was only 45 years old.

Murphy's memoir is still in print, so if you want to learn more about one of Hollywood's real-life heroes you can check out To Hell and Back on Amazon.
Posted by Jennifer Garlen at 11:04 PM