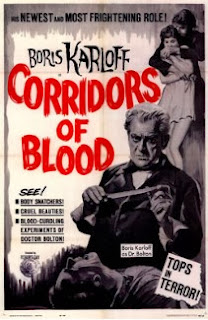 Despite its lurid title, Corridors of Blood (1958) is really a very serious picture that derives its horrors from the combined specters of Victorian surgical theater, drug addiction, and coldly calculated murder. This Dickensian medical chiller from director Robert Day stars genre heavyweights Boris Karloff and Christopher Lee, which is reason enough to see the movie for most classic horror fans, but it also offers a compelling combination of the themes that inform earlier films like The Body Snatcher (1945) and the many adaptations of Dr. Jekyll and Mr. Hyde. In its merger of murderous Burke & Hare shenanigans with de casibus tragedy, Corridors of Blood creates a surprisingly thoughtful meditation on the many Faustian bargains that Victorian medical practitioners were forced to make in order to advance their scientific knowledge and our own common good.

Karloff stars as benevolent surgeon Thomas Bolton, who strives to pioneer a technique for painless surgery by experimenting with forms of anesthesia. His professional peers doubt the practicality of Bolton’s work, but the doctor devotes himself to his research and becomes his own test subject for various opiate mixtures, to which he inevitably becomes addicted. While Bolton’s son, Jonathan (Francis Matthews), and niece, Susan (Betta St. John), worry over his increasing exhaustion and drug dependence, the proprietor of a seedy tavern sees Bolton’s distress as an opportunity to get falsified death certificates for murder victims being sold as cadavers to the local hospital.

Throughout the film, Karloff’s protagonist moves back and forth between two worlds. His friends and family tell him that he belongs in the respectable circle of well-off Victorian physicians, but he feels drawn to the shadowy underworld of extreme poverty, first by his commitment to heal the sick and later by his addiction. Like Dr. Jekyll, Bolton does not remember his actions while under the influence of his drugs, but Bolton never really becomes a monster during these breaks, even though his need for more chemicals does ultimately make him a criminal. What we as viewers realize is that the two worlds are far closer to one another than they originally seem. The operating room relies on desperate poor people for its surgical demonstrations, in which screaming, bleeding patients become edifying spectacles for wealthy men of privilege. The hospital’s autopsies depend on a constant supply of fresh corpses, which arrive from the ranks of the poor with very few questions asked about their origin. Bolton’s excursions into the darker world are discouraged by his peers because they lay bare the unsavory fact that “civilized” society exists on top and at the expense of its outcasts.

That is not to suggest that the residents of the Seven Dials are angelic martyrs. The film presents them as dangerous people, a strange menagerie of rejects, sharpers, and thieves. They are part Beggar’s Opera and part Oliver Twist, a dirty but cunning lot ready to murder one another for a mere handful of coins. Francis de Wolff has the largest role among them as Black Ben, the Falstaffian barkeep, but Christopher Lee’s Resurrection Joe is certainly the scariest. Joe provides cadavers for the hospital by suffocating drunks with a pillow, although he’s equally willing to employ a knife when the occasion permits. Without the heavy makeup of Dracula or the Frankenstein monster, Lee still manages to be truly terrifying, especially in his climactic scenes with Karloff. If Karloff’s character is a Faustian type, then Ben and Joe are his devils, a thought that gives extra import to their insistence that Bolton repeatedly sign his name to further their black plans.

Be sure to note Finlay Currie and Adrienne Corri in supporting roles as the medical superintendent and Black Ben’s partner, Rachel. See more of Christopher Lee’s work from this period in The Curse of Frankenstein (1957), Horror of Dracula (1958), and The Mummy (1959). Karloff’s other films from the late 1950s include Voodoo Island (1957), The Haunted Strangler (1958), and Frankenstein - 1970 (1958), although you should certainly catch his turn as the resurrection man in The Body Snatcher (1945) for the sake of comparison. Finlay Currie is best remembered as the truly Dickensian Magwitch in the 1946 adaptation of Great Expectations, while Adrienne Corri also appears in A Clockwork Orange (1971) and Vampire Circus (1972). For more from director Robert Day, try The Green Man (1956) and She (1965).

You'll find Corridors of Blood streaming on Hulu Plus as part of the Criterion Collection. Even on streaming, the crisp Criterion edition gorgeously displays the moody black-and-white cinematography that is a big part of this film's atmospheric appeal.
Posted by Jennifer Garlen at 2:59 PM