Classic Films in Focus: TWO ON A GUILLOTINE (1965) 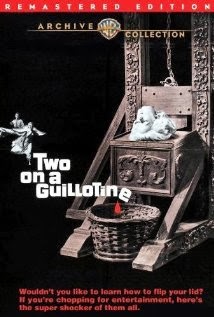 Although it’s billed primarily as a horror film, Two on a Guillotine (1965) throws in about as much romance and comedy as haunted house horror, which makes for an uneven picture that sometimes loses sight of its purpose and plot. Slow at times, especially in the second act, Two on a Guillotine is by no means a perfect or even a really good horror movie, but it’s watchable enough if you have patience with its digressions and some affection for its stars, including Connie Stevens and Dean Jones as a meet-cute couple and Cesar Romero as the mad magician whose demise sets the whole plot in motion.

Romero plays Duke Duquesne, a stage magician who leaves his daughter to be raised by relatives after the disappearance of his wife. The daughter, Cassie (Connie Stevens), grows up to be an exact double of her mother, and she returns to the family home after her father’s death. Duquesne, who has promised to return from the grave, leaves his entire fortune to Cassie provided that she spends a week in the house without losing her nerve. Cassie soon finds that the house is full of secrets, including many macabre practical jokes devised by her father, but she has stalwart company in the person of Val Henderson (Dean Jones), a young reporter who comes looking for a story but stays for the sake of the pretty heroine.

The opening sets the story up and creates a great sense of foreboding about the role of the titular guillotine, which Duquesne intends to use as the centerpiece of a new illusion recreating the execution of Marie Antoinette. Unfortunately, the movie then loses its momentum through the long funeral and will reading scenes, with Cassie and Val exchanging tart looks and lines that tell us they are destined to wind up together. Later, their date sequence once again disrupts the creepy effect of the house and brings the mystery screeching to a halt. Duquesne, being dead, disappears for most of the film, which is too bad because Romero could really work a character of this sort given half a chance. Cassie and Dean find plenty of Scooby Doo scares inside the house, especially at night, but the tension is repeatedly broken by practical reveals or the decidedly unscary appearance of a cute little bunny. Spend two seconds trying to make sense of the bunny’s presence and you won’t be able to think about anything else. Who feeds this rabbit? Is it leaving trails of bunny poop all over the place? How does it jump three feet straight up to get on top of tables and desks? The bunny even has his own theme music, which cuts into the score every time he shows up.

Only in the third act does the picture really get rolling, and it’s difficult to say much about that without spoiling the climax. Before the grand finale, however, we do get some fun haunted house moments, especially when the newly hired housekeeper (Connie Gilchrist) discovers one of Duquesne’s practical jokes. The best performance in the picture belongs to Virginia Gregg as Dolly Bast, the devoted nurse who once cared for baby Cassie and stayed on to look after Duquesne until his death. Gregg gets to take Dolly through a variety of moods, from grieving unrequited lover to wild-eyed harridan, and she keeps us guessing about her character’s motives right up to the end. If anyone in the movie realizes this is supposed to be horror, it’s definitely Gregg, and her scenes in the house are the scariest and most effective moments of the whole show.

Two on a Guillotine is currently available for streaming on Warner Archive Instant.
Posted by Jennifer Garlen at 9:25 PM