If you love classic Westerns, Old Tucson Studios might just be your personal piece of heaven. The working movie lot has been hanging around on the outskirts of Tucson, Arizona, since 1939, when it was built for the filming of, naturally, Arizona, which starred Jean Arthur and William Holden. Since then it has been the home of some 200 productions for film and television, from Rio Bravo (1959) and Three Amigos! (1986) to The High Chaparral and  Little House on the Prairie. These days it also doubles as a Western movie buff theme park, with shows and attractions designed to tickle a John Wayne fan's fancy until the cows come home. In exchange for the cost of admission and few hours of your time, you can stride the streets where the Duke's boots kicked up dust and dozens of other silver screen cowboys have fought their showdowns and drunk their beer. 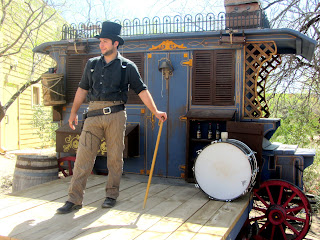 I admit I was nervous about visiting the place myself. I was afraid it would be tacky and crammed with cheap souvenirs at marked up prices. As it turns out, Old Tucson's biggest oversight might actually be a lack of shops. The place is decidedly uninterested in selling you anything beyond an entertaining day of shows and maybe some lunch and a cold sarsaparilla. In many ways, it's the exact opposite of Tombstone, which is all shops and no substance, and I suspect a lot of people who head to Tombstone would be better off checking out Old Tucson instead.

You can easily spend the entire day at Old Tucson, so don't get any fancy ideas about cramming in
the equally intense Arizona-Sonora Desert Museum and the scenic Saguaro National Park while you're on that side of town. The studio has shows that run all day long, and you more or less have to be there from opening to closing to catch them all. The schedule runs the gamut from funny skits to shootouts to musical revues, so there's something to suit every Western buff's preference.

Audience participation is a given at several shows. I was delighted to be picked for the stunt show (I admit to chatting up Ty, the actor, beforehand about being a classic movie blogger and author - did I stack the deck in my favor? You bet!). It's worth noting that you'll see the same group of actors throughout the day in different shows; by the end of a visit you might feel awfully fond of them, and you'll certainly appreciate their energy and enthusiasm. They have a dirty, sweaty, and dangerous job, but they really seem to love it.

One of the highlights of the day is definitely a performance by Loop Rawlins, a Cirque du Soleil veteran and rope trick master. He also does some nifty tricks with guns and whips, but the lasso is his best instrument. If matinee Westerns were still in vogue today, Loop would be a huge star. He has the looks, the talent, and the charm of the old cowboy kings. All he really needs is a smart horse!

You can take a guided tour of the studios and learn all about the history of the location and the movies that have been made there. There's also a sentimental John Wayne tribute film and a really fun musical review of songs from classic Westerns. If you can sing the words to "My Rifle, My Pony and Me" you'll love it. You can also catch a stagecoach ride out to the High Chaparral set and learn why you really wouldn't want to ride the stage to Lordsburg, much less to San Francisco.

I didn't expect much from the food at the studio, but I was pleasantly surprised by a tasty sandwich at the pharmacy deli counter, and the prickly pear lemonade from the candy shop really hit the spot. The biggest restaurant on site is Big Jake's BBQ, but there's also Pony Express Pizza and an ice cream stand that sells raspados in addition to the usual cones.

First-time visitors might be wondering if the price of admission is worth it. If you really love classic
Westerns, it's one of the best attractions you can visit anywhere, hands down. If you have kids who play cowboy all day, they'll love it, too. If, however, you love to shop and can't tell Tex Ritter from Randolph Scott, this probably ain't your kind of establishment, and you best mosey on down the road. Need to gauge your family's interest in a full day of such fare? Test the waters with a trip to Trail Dust Town in Tucson, and be sure to stay for the evening shootout show. If that leaves your group whooping and hollering with delight, then they're ready for Old Tucson.

Posted by Jennifer Garlen at 4:52 PM