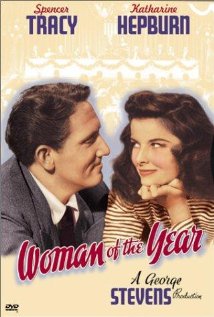 Directed by George Stevens, Woman of the Year (1942) offers us the first fateful pairing of that iconic Hollywood duo, Katharine Hepburn and Spencer Tracy. They would make nine films together, ultimately becoming one of the most famous couples in movie history, both for their onscreen performances and their enduring offscreen affair. This first outing together sets the tone for later Tracy and Hepburn pictures, and it's a thoroughly entertaining example of their unique romantic chemistry; the undertones of the heroine's inevitable comeuppance, however, might well prove troubling for modern women who struggle to balance their own professional and personal aspirations. Although its notions of gender identity reflect the limited views of its era, Woman of the Year is still a must-see film for Hepburn and Tracy fans.

Tracy plays sports writer Sam Craig, who spars with and then falls for celebrated political columnist Tess Harding (Katharine Hepburn). Their marriage, however, is soon on the rocks because Tess remains more interested in pursuing her career and building her professional reputation. Sam feels neglected and frustrated, and his relationship with Tess is further tested when she unexpectedly brings home an orphaned Greek refugee. When Tess is named Woman of the Year, the tension between the couple reaches its peak, and Tess must figure out whether her ambition is worth the sacrifice of her chance for domestic happiness.

The stars fall into the character types that eventually defined their films together: Tracy is the man's man, affable, solid, and ultimately the winner of every romantic contest, while Hepburn is a brilliant New Woman, smarter and classier than her partner and yet destined to be reshaped according to his will. The film works hard to prove to the audience that this arrangement is right, with Fay Bainter giving a particularly nuanced performance as Tess' successful but lonely aunt, a warning to show what Tess' own fate will be if she can't hang on to Sam. Certainly there is some merit in the idea that people need to work at their relationships if they want to keep them alive, but it doesn't seem at all necessary in the movie for Sam to make any comparable sacrifices. Because Tess has been more successful and has worked harder, she also has to give up more, and that will strike most modern viewers as rather unfair. Her ultimate humiliation comes with the final kitchen scene, where she is depicted as so ridiculously incompetent that she can't even work a toaster.

The problems with the movie's sexual politics don't make it any less interesting to watch; they are, after all, common in its time period, and at least Tracy's character offers some hope for balance when, at the very end, he asks, "Why can't you be Tess Harding Craig?" If anything, it ought to make us grateful for more flexible arrangements today, when Sam Craig might well become a house husband, and Tess Harding might more easily pursue her work with some telecommuting and a good cell phone plan. In retrospect, the most troubling part of the movie is the fate of Chris, the little Greek refugee who gets returned to the orphanage by Sam when he realizes that Tess isn't interested in real parental obligations. Sam and Tess might be able to negotiate their relationship by the end, but poor Chris represents their greatest failure, one that they don't seem to recognize for the tragedy it is.

Take time to appreciate the supporting roles played by Fay Bainter, William Bendix, and Dan Tobin. Hepburn earned a Best Actress nomination for her role as Tess, and the film won the Oscar for Best Original Screenplay. For more of Hepburn and Tracy, see Adam's Rib (1949), Desk Set (1957), and Guess Who's Coming to Dinner (1967). I'm also fond of the less familiar Without Love (1945), a film that explores the romantic possibilities to two people coming to share a passion for their work together. Two time Oscar winner George Stevens also directed A Place in the Sun (1951), Shane (1953), and Giant (1956). For different takes on Hepburn, see Bringing Up Baby (1938), The Philadelphia Story (1940), and The African Queen (1951). Don't miss Tracy's brilliant dramatic performances in Fury (1936), Captains Courageous (1937), and Bad Day at Black Rock (1955).

An earlier version of this review originally appeared on Examiner.com The author retains all rights to this content.
Posted by Jennifer Garlen at 5:42 PM