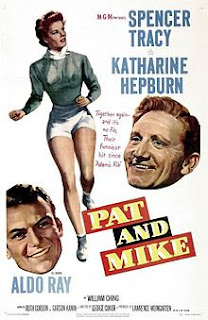 Following Adam's Rib (1949) in the progression of Hepburn-Tracy pictures, Pat and Mike (1952) reunites all of the key players who had made that film such a success; we have our two stars, of course, and also director George Cukor and writers Ruth Gordon and Garson Kanin, who were apparently inspired to write the story because of Katharine Hepburn's real talent for athletic pursuits. While this outing for the collaborators lacks the snap of the earlier picture, fans of the leading couple will find it worthwhile, although the most enthusiastic viewers will probably be those with an established interest in sports stars of the 1940s and 50s, since many of them make cameo appearances and demonstrate the sports for which they were known. Pat and Mike is not the best of the Hepburn-Tracy movies, but it features several solid performances and reveals a surprisingly quirky sense of humor that most people will appreciate.

Katharine Hepburn plays Patricia "Pat" Pemberton, a widowed university athletics teacher whose talent for sports dissipates whenever her pushy, condescending fiance, Collier Weld (William Ching), is on the scene. Determined to prove herself to herself if not to him, Pat accepts the offer of management from promoter Mike Conovan (Spencer Tracy), even though it's clear that Conovan has a slightly crooked idea of professional sports. They embark on a tour of tennis and golf matches, where Pat performs brilliantly until Collier shows up. Mike's evolving affection for Pat, meanwhile, inspires him to go straight, even though his investors take a dim view of any practice that hurts their chances of making money.

Pat is a different sort of character for Hepburn because of her nervousness around Collier, which is revealed to the audience through Pat's habit of putting an uncertain hand to her lip every time she spots Collier in the crowd. Away from his life-draining effect, Pat is confident and strong, even to the point of upsetting Mike by saving him from his mobster investors. Some viewers will find Pat's weakness irritating, particularly because Hepburn is playing her, but the story means to warn us against yoking ourselves to partners who undermine our abilities instead of nurturing them. We understand that Mike, class differences aside, is a better partner for Pat because he believes in her and wants her to succeed, while Collier only wants her to settle down and be a good little wife.

Hepburn is in particularly fine physical form, displaying her athleticism and looking much younger than she had in the previous year's The African Queen (1951). Tracy, however, appears older than his 52 years, and in this picture the age difference between the pair is at its most glaring. By Desk Set (1957) they would look well-matched again, the seven years between them not really being that much by Hollywood standards. Pat and Mike was their seventh picture together, and reportedly Hepburn's favorite, although most viewers prefer their first film, Woman of the Year (1942), and Adam's Rib (1949), their sixth, as the best of the nine movies they made together. Their last movie, Guess Who's Coming to Dinner (1967), is hard to watch because everyone on set knew that Tracy was dying, and the real-life emotions bleed through to give the picture a powerful but almost unbearable pathos.

Classic film fans will appreciate supporting and walk-on performances from Aldo Ray, Jim Backus, Charles Bronson, Chuck Connors, and Carl "Alfalfa" Switzer, while sports enthusiasts will enjoy seeing legends like Babe Didrikson and Alice Marble. Gordon and Kanin earned an Oscar nomination for their screenplay, the third nomination for their collaborative work. See more of George Cukor's work with Katharine Hepburn in Sylvia Scarlett (1935), Holiday (1938), and The Philadelphia Story (1940). You'll find Aldo Ray in We're No Angels (1955) and The Green Berets (1968). Look for more of William Ching in D.O.A. (1950) and In a Lonely Place (1950).
Posted by Jennifer Garlen at 9:57 AM