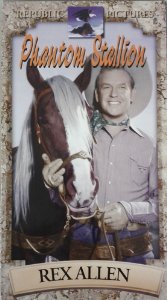 Fans of the singing cowboy genre epitomized by Roy Rogers and Gene Autry will remember Rex Allen as the star of a number of similar Westerns turned out by Republic Pictures in the 1950s, beginning with The Arizona Cowboy (1950). For the uninitiated, however, Phantom Stallion (1954) makes a perfectly serviceable introduction to the Rex Allen oeuvre, though it's light on actual singing aside from the opening theme. Like most matinee Westerns of its era, Phantom Stallion is short, only about an hour from start to finish, but it tells a good story, with all the action and peril one could hope for in such a small package.

Rex Allen, playing himself as usual, rides into a hotbed of dangerous deception when he arrives at the horse ranch of old Reilly (Harry Shannon), an Irishman in Mexican dress who blames a wild stallion for stealing his best mares. As it turns out, Reilly's niece, Claire (Carla Balenda), and her scheming lover (Don Haggerty) are behind the vanishing stock, but they have even deadlier plans to take control of the whole ranch. Aided by his pal, Slim (Slim Pickens), Rex must get to the bottom of the plot and protect young Tony (Peter Price) from becoming the its next victim.

Most of the action here involves horses in one way or another, with the wild stallion and a young filly getting even more screen time than Rex's mount, KoKo, who actually enjoyed top billing with the star in almost all of his films. Young viewers might be upset by the trampling death of one character, but for adults the scene adds a seriousness to the business that enhances our investment in the story. It's a striking reminder of the power and potential ferocity of animals that are often rendered invisible by their ubiquitous presence in Western films.

Equally ferocious is the picture's femme fatale, played with subtle menace by lovely Carla Balenda. The matinee audience means that most of Claire's sexual power remains more or less restrained, but there's quite a bit going on in the subtext. As a straight shooter hero, Rex seems mostly impervious to her charms, but other men are deceived at their peril, including her unsuspecting uncle. Not content to be a horse thief, Claire becomes a murderess, as well, and Balenda packs all of the character's ambition, cowardice, and even lust into a few well-deployed glances and expressions.

Phantom Stallion is one of more than half a dozen Rex Allen films to feature Slim Pickens in the sidekick role. See more of the pair in The Last Musketeer (1952), Old Overland Trail (1953), and Shadows of Tombstone (1953). For Allen's pictures with his other sidekick, Buddy Ebsen, try Rodeo King and the Senorita (1951) and Utah Wagon Train (1951). In later years, Allen gained additional fame as the narrator of many Disney films, including The Incredible Journey (1963) and Charlie, the Lonesome Cougar (1967). He even sang the original theme song for Disney's Carousel of Progress and provided the voice of the father character.