Classic Films in Focus: THEY DRIVE BY NIGHT (1940) 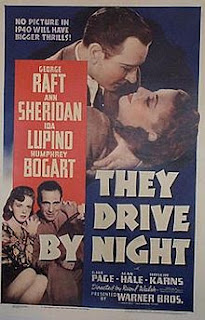 As a piece of classic cinema history, They Drive by Night (1940) makes an excellent study in the different ways in which some of our most celebrated actors became certified stars. Raoul Walsh's dramatic noir film about truck-driving brothers launched twenty-two year old Ida Lupino into stardom and helped build the career of the forty-one year old Humphrey Bogart, perhaps the most notable late bloomer in Hollywood history. Although its split plot gives the picture something of a multiple personalities complex, They Drive by Night makes the most of its excellent cast and offers viewers a very exciting, if somewhat convoluted, ride in the dark.

Joe Fabrini (George Raft) and his brother, Paul (Humphrey Bogart), work long hours as truck drivers in California. Paul would just as soon take a regular job, but Joe, the dominant brother, yearns for independence and success. When an exhausted Paul is maimed after falling asleep at the wheel, Joe goes to work for an old friend, Ed Carlsen (Alan Hale), to support himself and his brother, but Ed's devious wife, Lana (Ida Lupino), becomes obsessed with Joe. Even though Joe has already found love with another woman (Ann Sheridan), Lana hatches a twisted plan to win Joe for herself.

George Raft gets top billing, and the role of Joe is a noteworthy departure from his usual gangster type. A real straight arrow, Joe's only weakness might be his relentless desire to succeed on his own terms; he flatly rejects Lana's attempts at seduction and doesn't even drink, and his stand-up character attracts Ann Sheridan's frank, unsentimental heroine. Sheridan serves as a perfect foil to Lupino; where Lana Carlsen is needy, weak, and destructive, Sheridan's Cassie Hartley embodies feminine strength and support. Together they make a provocative variation on the usual good girl/bad girl dichotomy of film noir. Lupino, however, enjoys the best scenes in the picture, from her murderous moment with the automatic garage door sensor to her brilliantly deranged courtroom scene near the movie's end. Bogart has to take a backseat to most of this action revolving around Raft and the women, but he gives a very solid performance; Alan Hale, a go-to guy for loud, brassy characters, also has some excellent scenes as Lana's ill-fated spouse.

As a story, They Drive by Night proves less a straight road than a series of unexpected curves. At first, the plot focuses on the hard lives of truckers, promoting a pro-labor agenda and encouraging us to see Joe's independence as heroic. Later, it seems that Joe's refusal to work for a company was mere hubris, since his boss is a good guy who gives Joe every opportunity to do well, even though Joe only takes the job out of guilt over his brother's injury. The third act moves into the territory of women's melodrama with the love triangle between Raft, Lupino, and Sheridan, further supported by a subplot in which Paul's wife, Pearl (Gale Page), yearns to have a baby and rejoices in her husband's accident because it finally makes him stay at home. The mixed nature of the story has something to do with the fact that They Drive by Night is partly an adaptation of A.I. Bezzerides' 1938 novel, The Long Haul, and partly a remake of the 1935 film, Bordertown, which stars Paul Muni and Bette Davis in the Raft and Lupino roles.

An earlier version of this review originally appeared on Examiner.com. The author retains all rights to this content.
Posted by Jennifer Garlen at 5:55 PM