Classic Films in Focus: THE BARON OF ARIZONA (1950) 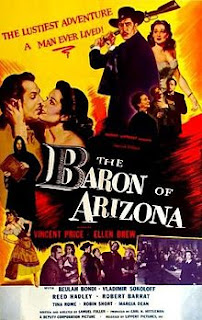 We associate Vincent Price with certain kinds of roles, although generally speaking he played villains in both his early dramas and his later horror films, sliding from oily Sir Walter Raleigh in The Private Lives of Elizabeth and Essex (1939) to the deranged anti-heroes of Corman's cult classics in the 1960s. Price's character in Samuel Fuller's The Baron of Arizona (1950) lies somewhere in between those ends; he's a morally ambivalent but imaginatively ambitious protagonist whom we grow rather fond of in spite of his dirty deeds. At once a Western, a heist adventure, and a romance, The Baron of Arizona succeeds on all fronts because Vincent Price so perfectly captures both the good and the evil that exist within the main character, whose grandiose scheme involves swindling the entire state of Arizona right out from under the United States government.

Price plays a fictionalized version of real-life con man James Addison Reavis, who really did try to claim Arizona through a series of elaborate forgeries and deceptions. A rogue and a swindler by nature, Reavis takes in and raises a young girl (Karen Kester) whom he purports to be the heir to the Spanish land grant; when she grows up (to be played as an adult by Ellen Drew), Reavis marries her and begins styling himself as the Baron of Arizona. Aiding him, to some degree unwittingly, are the girl's foster father, Pepito (Vladimir Sokoloff), and governess, Loma (Beulah Bondi). All the while, the government struggles desperately to poke holes in Reavis' claim, with forgery expert John Griff (Reed Hadley) at the forefront of the effort.

The movie streamlines and romanticizes the historical account, but the omissions strengthen the narrative and encourage our sympathy with Reavis, even when we know he's up to no good. Price walks a very fine line in performing the character as a theatrical scoundrel who still possesses enough credibility for us to hope for his eventual redemption. We have to be able to understand why Sofia falls in love with him and why other women find him so irresistible, and we also have to believe that the steadfast love of a woman like Sofia might actually inspire an alteration in Reavis' deeply devious heart. Ellen Drew does a particularly good job embodying this transformative devotion; her elegant features and soulful eyes work on the audience much more quickly than they do on Reavis himself, and we want Reavis to change because we want him to deserve her misplaced faith and affection.

As a Western, The Baron of Arizona depicts a fascinating chapter in the history of the West, and James Wong Howe's cinematography offers plenty of dust and frontier scenery to help things along. The monastery scenes in Spain are also a highlight, with Reavis biding his time as a novice monk for several years just to get a chance to alter one critical manuscript. There's a lot of adventure and derring-do involved in Reavis' magnificent scheme, including escapades with gypsies and encounters with angry lynch mobs, and Price carries it all in grand style. It's hard to imagine another actor capable of playing such a role, except perhaps for Tyrone Power, but it's a part tailor-made for the talents of Price.

Posted by Jennifer Garlen at 5:16 PM