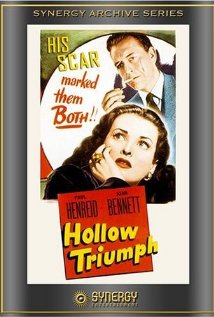 Sometimes good actors make bad movies, and such is the case with Paul Henreid and Joan Bennett in the dreadfully tepid crime picture, Hollow Triumph (1948), also known as The Scar and The Man Who Murdered Himself. Both performers deserve to be celebrated for their roles in other films, but the ridiculous plot, limping pace, and all too obvious "twists" of Hollow Triumph make it a picture that only their most devoted fans might enjoy.

Henreid stars as Johnny Muller, a well-heeled hoodlum who plans an overly ambitious hit on a rival gangster's illicit gambling operation. Force to go into hiding, Muller stumbles upon his exact double, a doctor named Bartok (also played by Henreid). A romance develops between Muller and the doctor's secretary, Evelyn (Joan Bennett), even though she ought to be smart enough to know better. Muller decides that the best way to elude his pursuers is to murder Bartok and assume his identity, but he soon discovers that the good doctor had secrets, too, which thwart Muller's plans for his own happy ending.

It's hard to buy Paul Henreid as a gangster, and he never manages to be either sufficiently charming or evil to generate much interest in his character. He and Joan Bennett have very little chemistry together on screen, even though Bennett is as lovely as ever in the role of the emotionally conflicted heroine. The titular scar that marks Dr. Bartok is supposed to be the lynchpin of the film's ironic twist, but an alert viewer ought to see the "surprise" coming from a mile away, and the ending seems like a letdown after all the fuss.

Henreid actually produced this picture himself, so he must have thought it worthwhile, but director Steve Sekely doesn't improve the material, and none of the supporting performances really stand out, either. If you want to admire Henreid, stick with Now, Voyager (1942) and Casablanca (1942). For better Joan Bennett pictures, try Little Women (1933) and Scarlet Street (1945). Steve Sekely is probably best remembered as the director of the 1962 cult classic, The Day of the Triffids. Hollow Triumph does have its admirers; try the well-written review at Film Noir of the Week for a different perspective from mine. If you really need to see this particular film for yourself, you'll find it available as The Scar on Netflix Instant.

An earlier version of this review originally appeared on Examiner.com. The author retains all rights to this content.
Posted by Jennifer Garlen at 5:38 PM