My good friend, James Graham, presented this paper at the Popular Culture Association in the South conference in September, and I thought it was much too interesting to be confined to that small audience. I asked him to share the paper here at Virtual Virago because I know a lot of people will enjoy reading about the beloved ride's history and its connections to a number of iconic horror films. 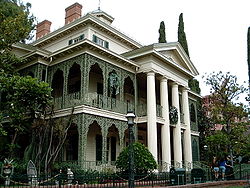 A brief for the uninitiated: The Haunted Mansion is a dark ride, a “haunted house”-style attraction at Disney theme parks. Guests board ride vehicles (termed “doom buggies”) and travel through creepy, kooky, and campy vignettes loosely organized into a three-act structure. First built over forty years ago and periodically renovated to take advantage of emerging special-effects technology, versions of the attraction exist in Disneyland, Walt Disney World, Tokyo, and Paris.

In 1948 Walt Disney began to envision his first theme park, a modest 8-acre plot he called “Mickey Park.” The heart and entrance to the park was to be the brightly lit Main Street U.S.A., with a city hall, fire and police stations, opera house, music store, encircling train, and one aspect he felt no American town should be without, ghosts. Over the next few years his ideas grew and the project moved from the Burbank studio lot to a spacious 160 acres in Anaheim he would later dub “the happiest place on earth.” The name had changed to Disneyland, but Main Street remained the entrance and many of Walt’s original ideas grew to become the four themed “lands” within the larger park: Adventure, Frontier, Fantasy, and Tomorrow. 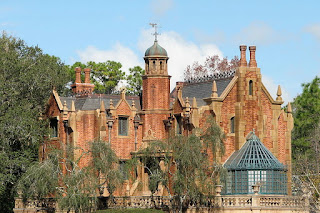 Disney’s plans, however, full of light and fantasy and wonder, still also included a sketch of a lonely and foreboding ruin on the outskirts of the park. Walt believed that every proper American town should have at least one haunted house. Nevertheless, the park opened in 1955 without its ghosts, and Walt did not live to see the attraction completed. More years passed before the mansion would open its doors to the public, during which time the Disney imagineers disagreed as to the direction Walt would have taken had he lived.

Walt Disney’s management strategy for the design of his haunted house was both acquisitive and hands-off: he would rob other departments of their best artists and idea men, throw them into a partnership with a few other like-minded conscripts, and set them loose with an unlimited budget, infinite space, and no definite calendar. Each group, seemingly regardless of their beliefs regarding the direction the ride should finally take, was told they were doing well and that Disney himself saw the merit in their approach.

The teams would visit each other and work on similar concepts, but would pull projects from other teams at will and reedit them into new directions. Because of the encouragement from above, each crew believed that they and they alone had Disney’s master goal in mind. 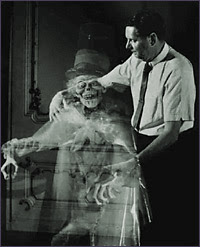 One such group was led by the original concept artists: Harper Goff, Ken Anderson, Marvin Davis, and Sam McKim. Responsible for the original concept sketches in 1951, these men worked on the project when it was still thought of as a walk-thru attraction, a large manor with regularly guided tours like the real-life Sara Winchester house or Hearst Castle at San Simeon. Nevertheless, many of the features they envisioned still found a home in the finished attraction twenty years later.

A second group was led by special-effects wizard and imagineer Yale Gracey and his collaborator, artist Rolly Crump. To achieve the most frightening tour they could imagine, they tirelessly worked and reworked a detailed script involving a ship’s captain, his murdered bride, and the ghosts of multiple violent homicides. A combination of cutting-edge 1960’s hardware and 19th century stagecraft, less than a quarter of what they worked on for a decade accounted for 90% of the special effects of the completed ride.

Imagineer and former animator Marc Davis (largely responsible for the success of Pirates of the Carribean) produced hundreds of watercolor sketches for the decidedly ride-thru attraction. His volumes of concept art include nearly all of the character-driven gags that make up the last two thirds of the ride. Davis and David Schweninger (who built all the audio-animatronic figures) worked hard to make their contribution a light-hearted collection of scenes that would be funny, not frightening. Davis always felt that the end product was still much too dark for Disney. 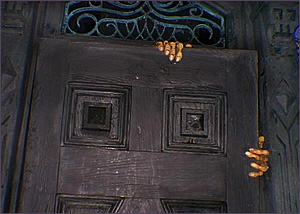 While still more imagineers hammered out the mechanics of the complicated new ride vehicles, occupancy, loading times, architecture, and scenery, one very crucial team hit upon a unifying solution. Xavier Atencio and Buddy Baker created a script that was a true compromise in that it pleased no one. Too silly for some and too terrifying for others, their plan was to introduce the guests to an indifferent host and unseen, uncanny threats, then gradually introduce the spirits and lighten the mood, until the finale in a ghost-a-palooza graveyard scene that is all whacky fun. 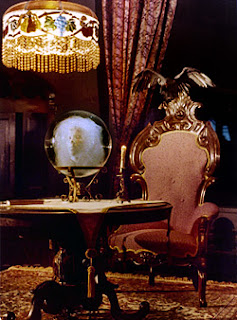 Tying it all together is Buddy Baker’s score—as a slow dirge, a waltz, or with X. Atencio’s lyrics as the swinging “Grim Grinning Ghosts.” The melody follows the guests through the ride, giving a sense of unity and swooping all around the musical scale but deliberately avoiding what Baker and Atencio saw as a musical “cliché” in 1960’s films of using tritones or the “Devil’s interval” to jar or scare the listener with a musical cue.

Books and fan websites like doombuggies.com devote a great deal of space to the individual efforts of these and other imagineers, documenting which man or woman was responsible for which aspect of the finished product and speaking to the lasting influence of The Haunted Mansion upon our popular culture.

What has intrigued me, however, is the question “What sorts of media influenced them in their creation of the ride?” In some cases the sources are readily apparent, others require digging to identify, and at least one example is (so far) purely conjectural, as we shall see.

What follows is a partial list of Gothic influences upon the creators of The Haunted Mansion, not to pick apart the masterwork attraction as an unoriginal work, but to use the ride as a lens or time-capsule to see what was popular in the Gothic during the decade of the rides’ construction, between 1960 and 1970. 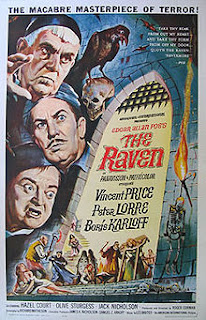 Evident in some of the unused early recordings and a talking character in the “story and song” album, a squawking (but nonverbal) raven (or his shadow) still follows guests through several scenes. One abandoned concept featured the cat or raven as a wicked familiar working against the ghost host to either save or doom the guests.

“The Black Cat”—talking one-eyed cat guide
Evident in some of the unused early recordings, the cat can be seen in many early concept sketches and his caterwauling can still be heard in the background of several scenes. One abandoned concept featured the cat or raven as a wicked familiar working against the ghost host to either save or doom the guests.

“The Pit and the Pendulum”
The story features an escape-proof room whose shape and dimensions silently change on the narrator to force him into the pit.
Anticipates the stretching portrait gallery with “no windows and no doors,” where suicide is the suggested “exit.”
The aforementioned chamber in the story has devils literally painted on the walls that are not visible until the chamber is heated/the lighting changes.
Anticipates some of the basic “shifting” effects in the Haunted Mansion

“The Premature Burial”
The conservatory includes a coffin whose occupant is trying to leave.

“The Black Cat” and “The Cask of Amontillado”
A crypt in the cemetery has a the arm of a skeleton attempting to finish walling himself in. 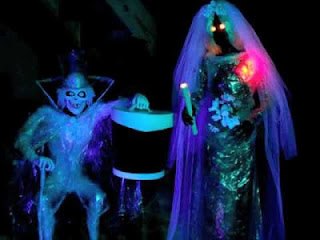 “The Tell-Tale Heart”
The effects in the attic were originally syncopated to the beating of the bride’s heart, including the appearance and disappearance of the “hat-box ghost’s” head.

The WDW attraction is described specifically in promotional material for its’ 1971 opening as “the Edgar Allan Poe-style 'Haunted Mansion'”.

Oscar Wilde - The Picture of Dorian Gray
The portrait in the foyer rapidly ages to a decaying skeleton before the eyes of guests.

Félicien Rops
Friend and part of a mutual admiration society with Charles Baudelaire and Théophile Gautier, Rops’ 1883 black and white illustration “The Supreme Vice” seems a partial inspiration for the popular (but rarely seen) pair of original attic occupants, the “hat-box ghost” and his bride.

Roger Corman
Corman is partly known for the popular cycle of six Poe-inspired films he directed (1960-1964), most starring Vincent Price:

The Raven (1963)
The film stars Boris Karloff, Vincent Price, and Peter Lorre as a wizard transformed into a talking raven.
Of unused ideas and paths not taken on the RedDot album, one is a piece of “ghost-host” narration done in imitation of Peter Lorre. [Another is as Bela Lugosi]
In the “Grim Grinning Ghosts” sequence at the end of the finished ride, a ten-second verse (on one loop of the spiel) is still sung in imitation of Boris Karloff.
[Coincidentally, not long before his death Vincent Price was hired to record an (unused) unique narration for Phantom Manor, the Disneyland Paris analogue to the Haunted Mansion]
(also on the RedDot album) 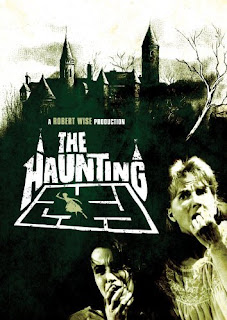 A compromise, The Haunted Mansion still shows traces of the conflicting pulls of the disparate teams. By reflecting the varied interests of each squabbling group, the ride can be read as a snapshot of what was big in the Gothic during the early 1960’s.

Some found inspiration in the macabre tales of Poe and Wilde, designing premature burials and portraits that aged before the viewer’s eyes. Some thought the public needed the pounding, breathing mansion of Shirley Jackson’s novel of contemporary terror The Haunting of Hill House (and its film adaptation). Others thought the ride should be campy fun, with tongue-in-cheek horror and talking ravens as in the Poe-inspired films of Roger Corman. A fourth and final camp had naturally assumed the attraction was derived from Disney’s 1937 Animated short “Lonesome Ghosts,” and thought it should be limited to the all-ages fun of a Mickey Mouse cartoon. 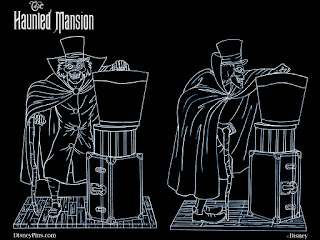 While some of the imagineers drew upon older Gothic literary sources or the Disney animated archives, it is clear that several idea men were influenced by the modern Gothic films in the cinemas at the time. It is these still-visible Gothic influences that make The Haunted Mansion a uniquely chilling and amusing entertainment.

Posted by Jennifer Garlen at 12:21 PM