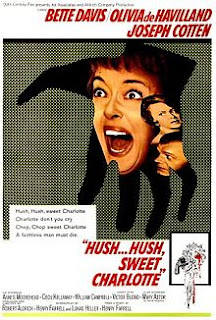 Southern Gothic is all about collapse, moral, physical, and psychological, but it clings to its faded charms. It's a painted blush on a corpse's cheek, a courtly bow from the Grim Reaper, a wrinkled hag in a debutante gown. We understand the connection between decadence and decay in this sort of tale, dripping with Spanish moss and smiling cruelty. In Hush... Hush, Sweet Charlotte (1964), director Robert Aldrich brings all of these elements into play to create an intelligent horror movie for adults, those who can understand that the real terror lies as much in the sagging lines of Bette Davis' aging face as it does in the gruesome shadows of the summer house.

Davis plays Charlotte Hollis, the last remnant of a wealthy Louisiana family, who is stubbornly rotting away in her ancestral mansion, despite the fact that the government is about to tear the house down in order to build a bridge. She has her own reasons for clinging to her home, all stemming from the brutal murder of her lover (Bruce Dern) that took place there nearly forty years before. Everyone in town thinks that Charlotte did it, but of course there's a lot more to the story than that, and all of the long hidden details begin to seep out with the arrival of Charlotte's cousin, Miriam Deering (Olivia de Havilland). Soon the house is full of strange sights and sounds. Is Charlotte finally losing her mind, or is something sinister at work in the dark rooms of Hollis House?

The film brings Bette Davis full circle from Jezebel (1938), an idea hinted at in the portrait of a young Davis that decorates Hollis House in the later film. It is actually a painting of the star in her earlier role as Julie Marsden, and, indeed, Charlotte is a lot like what Julie might have become, brittle, stormy and willful, a difficult woman aging badly and at war with the world. The movie was meant to capitalize on the success of Whatever Happened to Baby Jane? (1962) by reuniting stars Davis and Joan Crawford, but Crawford left just a few days into filming and was eventually replaced by Olivia de Havilland. The change was a boon to the film, since de Havilland makes for a much more interesting counterpoint to Davis, and it makes a wonderful ironic statement to have the angelic martyr of Gone with the Wind (1939) play Jezebel's duplicitous foil.

The other players hold their own against the two leading ladies. We get Joseph Cotten drawling away as the scheming Drew Bayliss, Agnes Moorehead feisty and hard-faced as Velma, Mary Astor as the dying Jewel Mayhew, and Cecil Kellaway as the kindly insurance agent, Harry. Bruce Dern looks suitably tragic and troubled as Charlotte's lover, John Mayhew, and Victor Buono is terrific as her overbearing father, Big Sam. Moorehead won a Golden Globe and was nominated for a Best Supporting Actress Oscar for her part. Watch the studied lethargy she adopts whenever prying outsiders come around, the way she shifts her body language and facial expression between secret humane energy and assumed assumed insolent sloth.

Stunning visual compositions make full use of the black and white medium and suggest the themes and subtexts of the narrative. We see many instances of characters looking through windows or framed by windows and doors; the camera also emphasizes the opening and closing of doors in several key scenes. These images remind us how trapped Charlotte feels in Hollis House, but they also symbolize her imprisonment within her own mind; her antagonists make use of both of her prisons in their efforts to destroy her. Charlotte wanders through the faded rooms of the house at night, calling out for her murdered lover, herself a mere specter of the tragic girlish heroine she once had been. This house is definitely haunted, and the camera work builds our sense of dread beautifully, until we are fully prepared to be drawn into Charlotte's dreamlike vision of the ghostly party, where faceless revelers await the lovers' dance.

Nominated for seven Academy Awards, Hush... Hush, Sweet Charlotte is a rarity among horror films, although it has its peers in the likes of Gaslight (1944), Dragonwyck (1946), and The Night of the Hunter (1955). All of these Gothic thrillers have more in common with early horror than they do with the genre's modern incarnation. If you like goosebumps without gore, then these are the films for you. Try the sadly overlooked Lady in White (1988) for a modern revival of the classic Gothic style.

An earlier version of this review originally appeared on Examiner.com. The author retains all rights to this content.
Posted by Jennifer Garlen at 5:30 PM