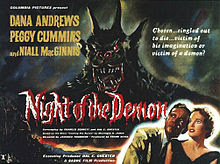 Jacques Tourneur, who had made his mark on horror directing Val Lewton's Cat People (1942), also helmed Night of the Demon (1957), and he had certainly learned a lot from his time with Lewton at RKO. Tourneur wanted to make another horror film in the same vein as Lewton's pictures, where the audience is kept in suspense about the reality of the supernatural aspects of the story, but pressure from higher up in the studio chain forced him to lay the movie's cards on the table, so to speak, and reveal the demon. It was a mistake, and Tourneur knew it, but it goes to show how little the studio brass sometimes understands its own medium. As a result, Night of the Demon is a flawed gem, but fans of classic horror certainly ought to find it worth watching, for its excellent qualities go a long away to make up for its faults.

Dana Andrews stars as skeptical man of science Dr. John Holden, who comes to England to help debunk the claims of a devil cult's charismatic leader, Dr. Julian Karswell (Niall MacGinnis). One of Holden's associates has recently turned up dead under rather unusual circumstances, and Joanna Harrington (Peggy Cummins), the niece of the deceased man, is certain that Karswell's cult is behind it all. Holden and Joanna join forces to unravel the mysteries of the demonic cult, but it soon becomes clear that Karswell will brook no meddling in his secrets, and our protagonists must race against Holden's date with death to reverse the terrible fate that has been declared for him. 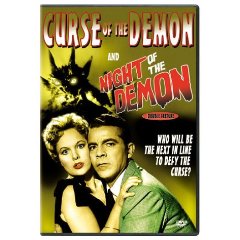 Dana Andrews is a very fine actor, but this is not his best film, mainly because Holden is such a doubting Thomas that it takes him entirely too long to be afraid of anything. Much of a horror film's fear depends upon the audience's sympathetic sharing of the hero's own rising terror, and if the hero isn't afraid, then the audience isn't, either. When he finally does become frightened, the movie picks up, but it's rather late in the game by then. Peggy Cummins is more palpably afraid as Joanna, and she has a wonderful wide-eyed expression of horror, but the demon isn't after her. Maurice Denham makes a brief appearance as the doomed Dr. Harrington at the opening of the film, and he is perfectly terrified, which really helps to build the atmosphere as he makes a panicked journey through the woods at night to visit Karswell. It's too bad he gets replaced by Andrews' character so quickly.

Really, the best player in the whole movie is Niall MacGinnis as the villainous Karswell. With his twisted beard and portly frame, he steals every scene where he appears, but he is especially wonderful during a Halloween party for the village children, where he turns up dressed as a clown. Horror fans all know that clowns are not to be trusted, but Holden and Joanna are simple enough to think that the costume means that Karswell is just a harmless, jovial old man. We first see him pulling puppies out of a hat to amuse the youngsters, but later he conjures a wind storm that sends those same children shrieking across the lawn in fear. Crafty, duplicitous, and wry, Karswell acts as a kind of puppet master, controlling his cult followers and his enemies with equal finesse, until Holden finally realizes the serious stakes of the game and manages to outwit him.

Ignore the few brief scenes where the demon turns up; they are laughable and distracting. Focus instead on the opening shots of the fearful forest road, the wonderful scenes of Holden snooping through Karswell's mansion at night, and that great party sequence. The shots of the Hobart family are also delightful in a British Deliverance sort of way. What the studio executives didn’t understand, but we see so pointedly proven in the film, is that the scariest things are those we don’t see, and the most terrible monsters are those who remain hidden, in the dark of the trees or behind a clown’s painted face. This was Lewton’s great lesson to all of his directors, including Tourneur and Robert Wise, as the delicious horrors of The Haunting (1963) make clear.

If you haven't seen Tourneur's earlier horror films, Cat People is the place to start, with I Walked with a Zombie (1943) and The Leopard Man (1943) both excellent outings, as well. Oddly enough, Tourneur also directed the horror camp classic, The Comedy of Terrors (1963), with Vincent Price, Boris Karloff, Peter Lorre, and Basil Rathbone. If that kind of team-up doesn't make your head spin, nothing will. Dana Andrews is best remembered for his roles in The Ox-Bow Incident (1943), Laura (1944), and The Best Years of Our Lives (1946). See more of Peggy Cummins in Gun Crazy (1950), and look for Niall MacGinnis as Zeus in the mythological classic, Jason and the Argonauts (1963).

An earlier version of this review originally appeared on Examiner.com. The author retains all rights to this content.
Posted by Jennifer Garlen at 2:17 PM