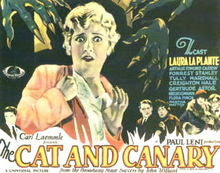 Silent horror films rely on provocative images and creative camera work for their thrills; therein lies much of their charm. Paul Leni's 1927 picture, The Cat and the Canary, is a great example of this kind of horror, although it leavens its spookier aspects with a liberal dose of humor. Its lively, well-defined characters fairly jump from the screen, and it takes the "old dark house" genre of horror films through all the usual conventions with energy and imagination. Like most silent films, it requires a certain amount of patience from its audience, but even novice viewers will find The Cat and the Canary sufficiently entertaining.

Laura La Plante stars as the lovely Annabelle West, who will inherit her deceased uncle's immense wealth only if she is officially declared sane after spending a night in the dead man's mysterious mansion. Her fellow guests in the house are her disinherited relations, all of whom might have abundant reasons to hope Annabelle sees something to scare her out of her wits over the course of the night. Rumors of the uncle's ghost give the visitors a chill, but their dread increases with the news that a maniacal killer, The Cat, is on the loose and may be hiding inside the house. 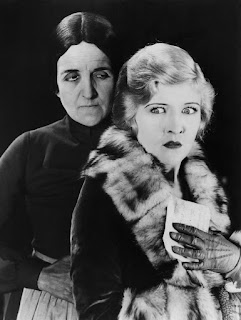 While several of the characters are played for laughs, there are plenty of thrills to be found as Annabelle encounters one strange event after another, including secret doors, dead men, and a disfigured murderer. The housekeeper, ironically named Mammy Pleasant and played by Martha Mattox, is especially creepy. Her droopy eyes and dry humor make her one of the picture’s most fascinating figures, as well as an excellent example of a Gothic stock character.

The Cat and the Canary started out as a stage play in 1922, and it has been adapted for film several times. In 1939, Bob Hope and Paulette Goddard starred in the most notable remake of the original movie, but it was also remade in 1930, 1961, and 1979. Although it is not as well known today as other early horror films from Universal, the 1927 version holds up well, and it makes a perfect atmospheric backdrop to a Halloween party or a solid choice for a quiet October night curled up on the couch.

An earlier version of this review originally appeared on Examiner.com. The author retains all rights to this content.
Posted by Jennifer Garlen at 11:47 AM