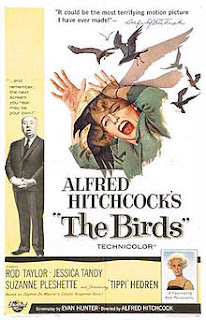 The Birds (1963) was Alfred Hitchcock’s next theatrical project after the popular success of Psycho in 1960, and like Psycho it delves more thoroughly into the horror genre than the director’s earlier pictures. Although some of its special effects show their age, The Birds remains one of Hitchcock’s best known films, in part because the deranged title creatures have become such a commonplace in modern popular culture, with references and allusions everywhere from High Anxiety (1977) and The Far Side cartoons to episodes of Animaniacs (“The Boids”) and even Arthur (“The Squirrels”). Based on a story by Daphne du Maurier, The Birds is also famous for its introduction of Tippi Hedren as one of Hitchcock’s most inscrutable icy blondes, but its real appeal lies in its unnerving depiction of a natural world in revolt, a theme that would be picked up in countless horror films that followed.

Hedren stars as Melanie Daniels, a mercurial socialite who meets Mitch Brenner (Rod Taylor) in a San Francisco bird shop and decides to pursue him to his home in Bodega Bay. There she meets Mitch’s former girlfriend, Annie (Suzanne Pleshette), whose own feelings about Mitch complicate the development of a friendship between the two women. Melanie’s arrival in the community coincides with the beginning of a series of deadly bird attacks, and she eventually ends up barricaded inside Mitch’s home with his mother, Lydia (Jessica Tandy), and young sister, Cathy (Veronica Cartwright). As the birds violently descend on the house in repeated waves, the survivors’ nerves weaken, but there appears to be no cause or explanation for the assault.

The human performances are solid in terms of building our own anxiety about the unfolding events, with Jessica Tandy especially good as Mitch’s needy mother. Hedren plays Melanie as a generally unlikable character, but if we liked her too much we would not perversely root for the birds to get her. The famous closet scene is really about giving the audience what it wants, which creates a different and more subtle kind of horror if we stop to think about it. Pleshette’s Annie strikes a more sympathetic chord, which the director promptly plucks in the most disturbing manner, while Taylor’s Mitch wrings our pity as the only level-headed man surrounded by all of these hysterical women. He brings new meaning to the term “hen-pecked” as he tries to wrangle his flock of helpless but emotionally demanding biddies. 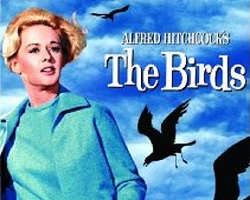 The actual birds represent the upheaval of natural order, a theme with a long history going at least as far back as Shakespeare and the Elizabethan world order. In the modern context, however, we see nature as inherently rebellious, liable to rise up and strike without warning or obvious reason. Natural order simply collapses, and our delusions about being the dominant species are laid bare. Hitchcock provocatively uses the birds to create a visual vocabulary that presages things to come, particularly the rise of the zombie as popular culture’s most horrific symbol of nature out of joint. The birds have a great deal in common with the zombies in George A. Romero’s Night of the Living Dead (1968), which would arrive just five years later to define the conventions of its specific genre. Watch the sequences in which the birds attempt to break through the barriers into the Brenners’ home, for instance, or the moment when Mitch has to reach out through the window while the birds mass around it, viciously pecking his vulnerable flesh. Hitchcock seems to be trying to give birth to the zombie movie without realizing that one might actually use zombies to do it.