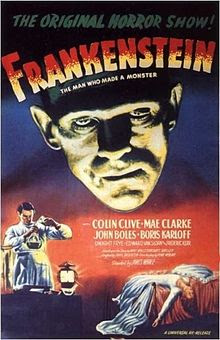 Let's be clear about one thing: Frankenstein is the man, not the monster. Although films like the 1931 Frankenstein have irreparably muddled the original story in the public imagination, Mary Shelley's novel, way back in 1818, was about human vanity, the perils of scientific progress, and spectacularly irresponsible paternity. Her protagonist was the over-reaching scientist, the man who thought he could be God, and that is why the novel bears his name. We forget much of this when we watch classic films based on the story because the monster becomes the whole show, and the movie monster is a far different creature from the one that Shelley imagined. Despite its gross infidelity to its source material, director James Whale's Frankenstein has become a high point in the history of horror, a watershed event on whose existence countless subsequent films depend. If you want to understand the visual and thematic vocabulary of classic horror, you have to start here.

The film's version of the story owes much of its material to Peggy Webling's 1927 dramatic adaptation. We get Henry Frankenstein, not Victor, and the scene is modern day. Henry (Colin Clive) wastes no time in getting his gruesome creation up and lumbering, although his friends try very hard to talk him out of it. Lovely Elizabeth (Mae Clarke) waits to marry him, even though Henry's best friend (John Boles), who, oddly enough, is named Victor, clearly would be glad to step in as the groom. Henry's mentor is Dr. Waldman, played with typical gravitas by Edward Van Sloan; the good doctor tries to talk Henry out of the experiment, but he seems reluctantly fascinated by the whole thing himself, so his entreaties have little effect. Eventually, Boris Karloff's monster takes over, and the rest of the picture belongs to him. The other characters are just the grist for his mill, so to speak (it's a bad joke, and you'll get it once you see the ending).

Given these deviations from its source material, what is it about Frankenstein that makes the movie so great? Whale's direction counts for a lot; he takes this whole enterprise seriously in terms of art, and the scenes he creates get referenced and remade in later films with justified reverence. Boris Karloff invests the monster with tragic grandeur; there is pathos in his expression, and a terrible innocence in the way that he flings little Maria to her death. How could he know better? Newly born yet rejected by his creator, the monster's crimes have more to do with a childlike ignorance of right and wrong than with the kind of brain that rests inside his huge, bolted head. Dwight Frye makes his own horror icon with cringing, sadistic Fritz, who will become the model for so many Igors after him. It might have helped if they had stuck with the original ending and killed off Henry; that climactic fall certainly looks fatal, and poetic justice demands punishment for such hubris.

Over time, these elements become the stuff of comedy and parody, but in 1931 it isn't funny yet. In fact, the movie opens with a warning, delivered with just a wry smirk by Edward Van Sloan, who lets the audience know what it's in for. Looking back at Frankenstein as we do, through the layers of sequels, spoofs, and revisions, such a warning hardly seems necessary. Karloff's craggy, scarred face is as familiar to us as an old friend, but what was it like to see him for the first time? There he is in the film, backing through the door, the actor's name left a blank in the opening credits, a mystery and a horror. When the heavy brow, the leaden eyes, and the poor, patchwork features are revealed at last, we are meant to shudder with a deep sense of dread. The dead thing lives, and man has usurped the very throne of God. In the age of plastic surgery, we ought to understand that horror more.

Karloff would return to the role of the monster in Bride of Frankenstein (1935) and Son of Frankenstein (1939), while Bela Lugosi, Lon Chaney, Jr., and Glenn Strange would take the character on in later classic films. Here's a bit of mind-bending trivia along those lines: in Casino Royale (1967) and The Horror of Frankenstein (1970), the actor in the monster role would be David Prowse, better known for playing that other monstrous walking corpse, the Dark Lord of the Sith himself, Darth Vader. Don't think George Lucas saw the similarities? Watch Whale's Frankenstein, and then go watch the ending of Revenge of the Sith (2005).

An earlier version of this review originally appeared on Examiner.com. The author retains all rights to this content.
Posted by Jennifer Garlen at 9:08 AM